Get the app Get the app
Already a member? Please login below for an enhanced experience. Not a member? Join today
Training & Safety Online Learning Mountain Flying Flight Planning 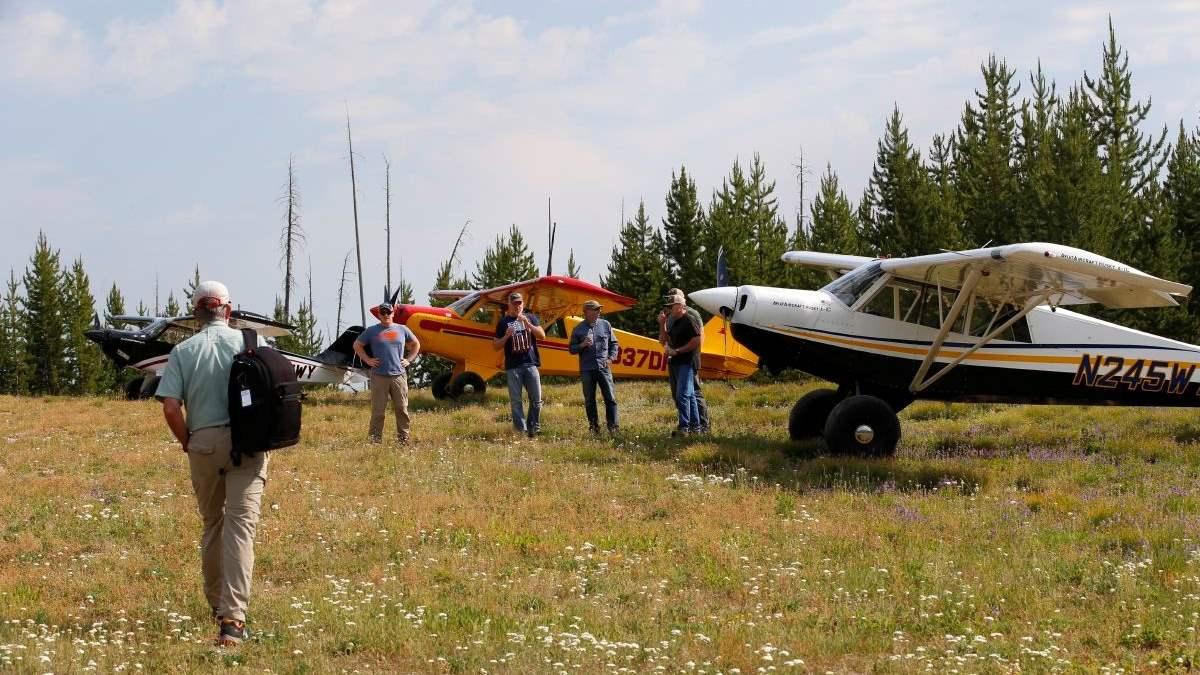 Good flight planning is always important—but in the mountains it’s critical. The airplane is closer to its performance limits, the pilot is closer to the limits of his or her skill, more things can go wrong, and there are fewer options in an emergency.

Consider planning a flight near Lake Tahoe, which is nestled in the High Sierra along the California/Nevada state line. Which route is best—A, B, or C? 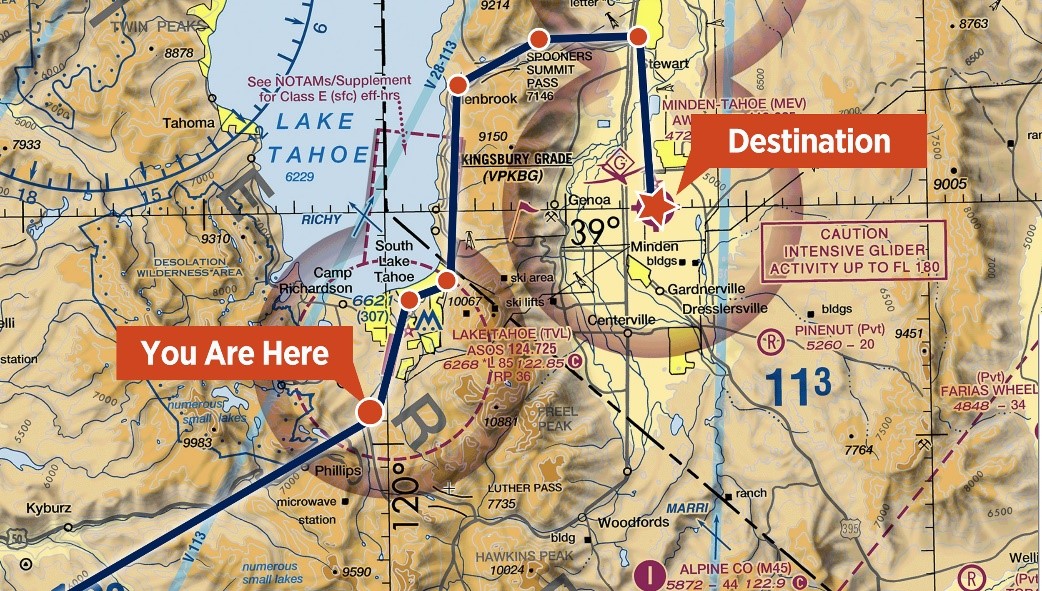 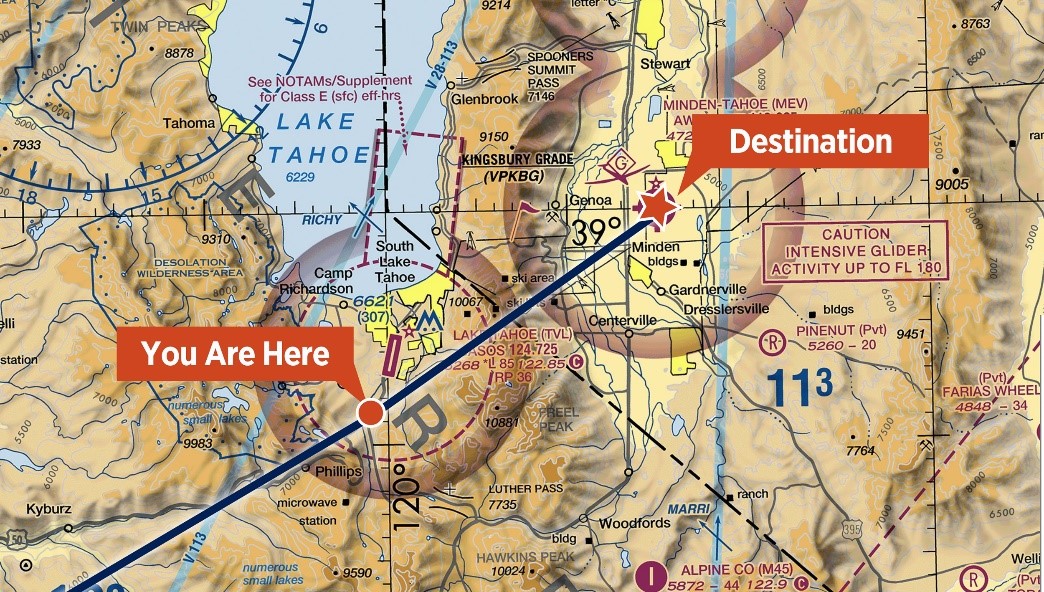 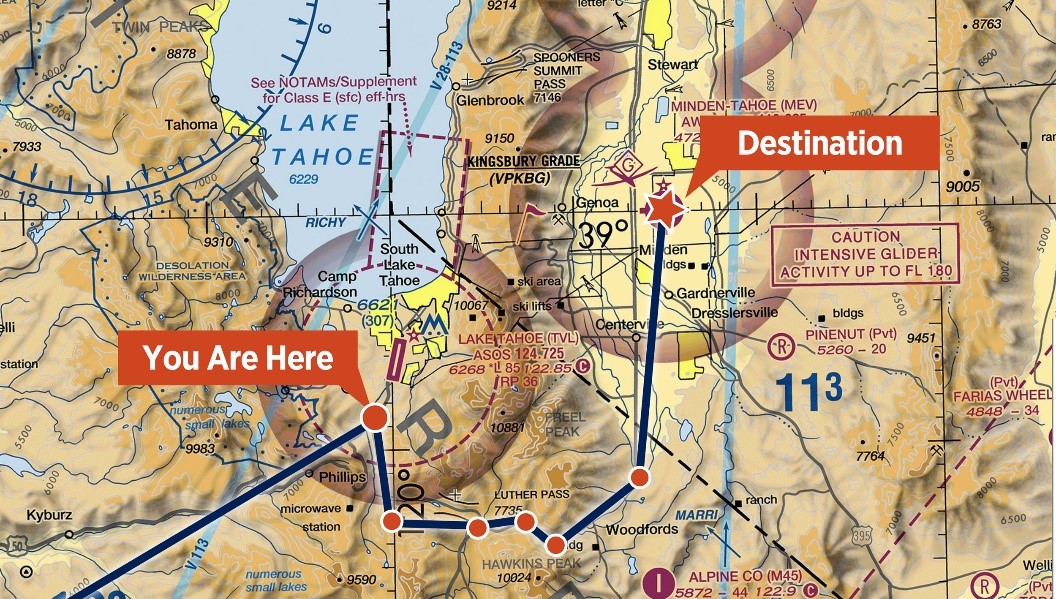 Although the direct route, Route B, may be tempting, the best option would be to fly along Lake Tahoe using Route A. Flying along Lake Tahoe and through Spooners Summit Pass offers lower terrain, nearby roads for emergency landings, and a large body of water for ditching.

On hot summer days, it’s often best to fly early in the morning when temperatures are cooler and winds are calm. High density altitude effectively “closes” some airports from mid-morning through early evening. Also, some airports operate on a seasonal basis. Be sure to check notams and phone ahead for details, and remember that density altitude changes throughout the day. Just because you can land somewhere doesn’t mean you’ll be able to safely fly out a few hours later.

Because terrain features can be very difficult, if not impossible, to discern at night, VFR-only pilots should seriously consider limiting themselves to daytime flights. Experienced mountain pilots treat night flights as instrument flights—and some avoid them entirely.

Many GPS units and multifunction displays (MFDs) can depict terrain and obstructions—significantly enhancing situational awareness while flying in mountainous areas. Some GPS units offer a “mute” option for auditory terrain proximity warnings. If your GPS is so equipped, make sure you’re using that function appropriately.

Repetition can increase complacency. Performing the same tasks in the same way may lead us to overlook things we take for granted, potentially ending in disaster. In this accident case study, we’ll look at why a twin-engine airplane impacted a mountain at night on what should have been a routine flight.

GPS is everywhere these days, but there’s still plenty of room for pilotage in the mountains. It’s always a good idea to cross-check GPS depictions (and charted landmarks) against what you can see out the window. You should aim to keep your eyes outside as much as possible—developing proficiency in pilotage will aid this essential aspect of mountain flying. You don’t want terrain to creep up on you because your eyes were inside. When flying below a ridge line or in a canyon, you should rely almost entirely on pilotage and dead reckoning. This may be a rusty skill, so go practice before flying into the backcountry.

In the mountains, the airplane is closer to its performance limits, the pilot is closer to the limits of his or her skill, more things can go wrong, and there are fewer options in an emergency.

Situational awareness must be maintained during all our flights, but it is especially critical in the mountains where conditions can change rapidly. These are a few important questions that need to be asked throughout every flight:

Any change could signal a potential hazard.

What if weather, passenger, or mechanical problems occur? Always be prepared to divert or return to the departure airport if necessary. Always give yourself an out in the mountains.

Experienced pilots are always looking for the best emergency landing site. Identify possible landing sites on the sectional chart during preflight planning and reevaluate from the air. Use tools like Google Earth to get a more accurate picture of the terrain before the flight and familiarize yourself with landmarks. Also remember to file and activate a flight plan to assist in search and rescue operations, should they become necessary.

A low-flowing stream is relatively flat, but look out for any nearby trees. From a survival viewpoint, streams offer plenty of fresh water, fish, and wildlife. The open air above also makes it easier for search and rescue teams to spot you and your aircraft.

Grassy areas and meadows often provide suitable landing areas, but remember that tall grass can hide potholes, rocks, or other hazards. Be aware of recent weather as well. A muddy field with deep grass might grab onto your tires in a surprising way and flip the airplane if you aren’t prepared for it. Keep the aircraft out in the open to help search and rescue teams spot you more easily.

A dirt road is generally obstacle-free and long enough to accommodate a landing and takeoff. Additionally, the road can make it easier to locate the nearest civilization and may help search and rescue teams find you.

Help shouldn’t be too far away if you manage to land on a paved road. Paved roads often provide a suitable landing and takeoff spot—but look out for power lines and traffic!

Watch as a series of delays, poor decisions, and lack of preparation turns a four-hour cross-country flight into a 30-hour survival crisis for a pilot and his family in the unforgiving Idaho backcountry.