Walking the wing while my son pilots the airplane

When I first laid eyes on my newborn son in the delivery room, I never imagined 31 years later I would be looking down on him from atop a Stearman wing as he piloted a 1943 PT–17. 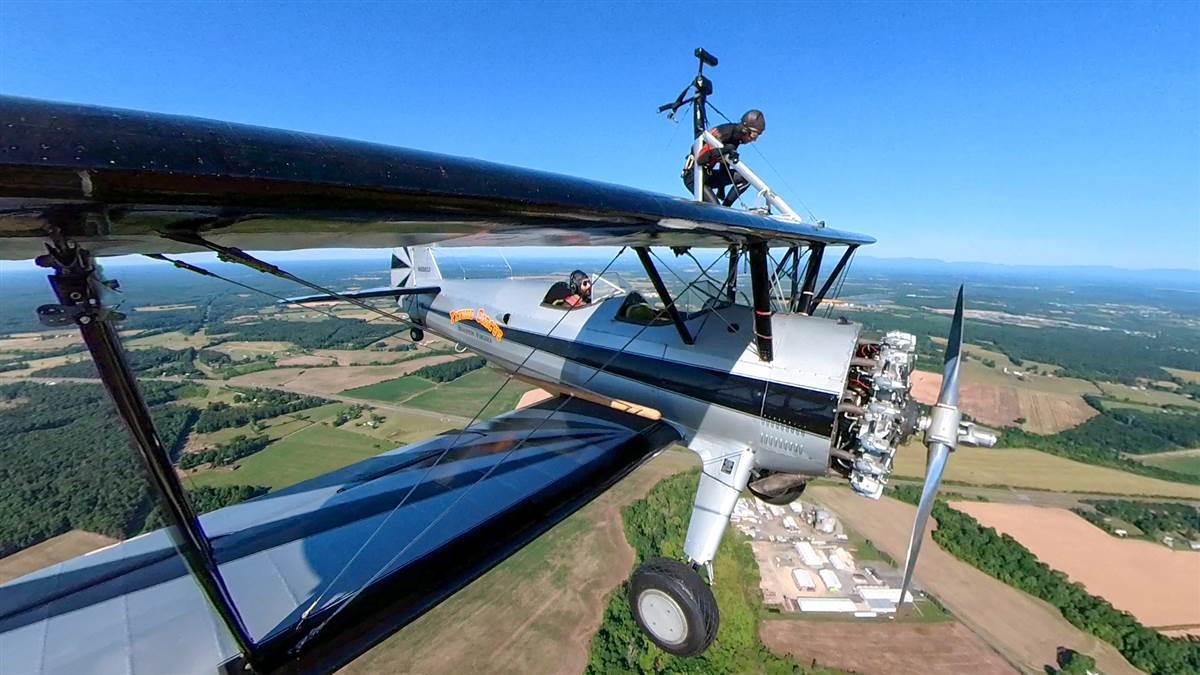 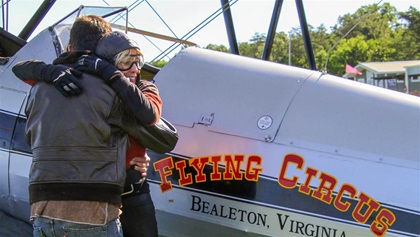 It would be our attempt at the first documented mother-son wing walk with mom on the wing and son in the cockpit piloting the aircraft. No other known mother-son team had accomplished this before, and here we were, giving it a go.

The seed was planted in 2009 when I co-emceed the Winston-Salem Air Show. I have helped narrate many daring acts over time, but it was always the wing walkers who were the heart-pounding showstoppers. Glamorous fearless beauties pushing the envelope, showcasing the fantastic nature of flight. I couldn’t believe my eyes. Were these ladies crazy? Who in their right mind would do such a thing? I was in awe, shocked (there are parts of the flight where the wing walkers are not tethered to the aircraft), yet oddly inspired. I had never seen such gutsy gracefulness.

A long-time flight instructor, I flew with a student pilot to Virginia to watch RJ perform. I was smitten by the show and its enchanting energy. Truly a magical place. It was here I saw an attractive woman in her 50s, Beth Sommer, perform her wing walking act. I admired her badassery. I wanted to be her. In a stroke of good fortune, Sommer became my mentor. She would train me for a one-time, personal accomplishment walking the wing with RJ flying the airplane. Flying Circus crew chief Joe Bender mentioned this likely would be a historic record, a first for a mother and son. 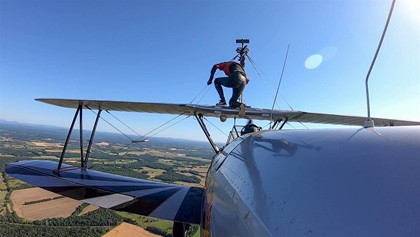 My wing walk, if approved, would be an exceptional private event requiring special permission from Flying Circus officials. I was told flat out how dangerous this could be, and asked why I would want to risk traumatizing my son should something go wrong, like falling off the wing as he was flying. It was too horrible for me to imagine, but the officials stressed the possibility. Those words never left me. They would play a key role in our adventure.

I am blessed with a colorful storied life featuring exciting adventures as a television journalist and record-breaking pilot. At this late stage in life, having accomplished so much, nothing excited me. I needed something to put the wind back in my sails. Wing walking filled the bill. We should do what makes us happy. We only have so much time. You feel that at age 67.

There were practice sessions in the hangar climbing up and down the Stearman over the course of a year. There were bruises. The flying wires leave marks on your arms and legs as you maneuver your way out of the cockpit to the upper wing and back down. A badge of honor, I figure.

Practice went well. I was greenlighted to wing walk as long as I could perform the climb up on the wing, then down, safety, during a taxi test on the runway with the 450-horsepower Stearman’s propeller blasting me in all her glory.

The morning of the event arrives. I successfully pass the final taxi test.

When RJ asks if I am ready, I am in my son’s capable hands. I see RJ in the mirror as we roar down the Flying Circus’ grass runway. Glorious blue sky. The moon smiles down at me through the flying wires. I soak up the breathtaking beauty of the Virginia countryside as the Earth falls away.

There is total trust. RJ is an award-winning pilot performing at airshows including EAA AirVenture. He’s been flying since I was pregnant with him. As RJ’s first flight instructor, I taught him to fly. I never doubted his ability to accomplish this safely.

RJ signals me when it is time to climb out of the cockpit. Right hand, left hand positioned in holds to stand up in the seat. Right arm around the front stanchion…and so the choreography begins.

The wind is stronger than I anticipated. There is lots of resistance. An aggressive push-back force. But there is no fear. Just lots of wind. I use muscle memory for the correct hand and foot holds, intense focus, and then an unexpected recognition that I do not feel as secure as I should.

After getting on the top wing, I hesitate, then stop the dance, the cautionary words of the Circus official whispering in the wind. I am sort of pretty sure I could have fully stood up, positioning myself to buckle in to the stanchion belt to enjoy the ride, but it felt iffy. “Pretty” sure isn’t sure enough. I am untethered to the aircraft. The iffy feeling urged me to retreat to the cockpit.

RJ says he is proud I did the right thing. I am proud of him for recognizing that. My greatest accomplishment is parenting a kind, wise kid with a good head on his shoulders. And a great pilot.

Regarding setting a mother-son record, Beth says the fact that I made it up onto the wing counts! These are the moments that mold a life. This experience was thrilling and terrifying. I am over the moon for the opportunity to share it with my son and the fabulous folks at the Flying Circus. And while yes, as RJ’s mother, I gave him life, really, he gave me mine.

MayCay Beeler is an ATP and CFII who initially learned to fly for a TV assignment as an ABC-TV reporter. She holds world aviation records in the experimental Questair Venture. She has piloted more than 30 different makes and models of aircraft ranging from the Beech Skipper to the HondaJet Elite.