Get the app Get the app
News & Media Movers, shakers, electric aircraft makers

UP Summit dubbed 'Davos of mobility' held in Arkansas

Entrepreneurs, experts, and investors spent two content-rich days in the American heartland discussing the future of mobility and, especially, how to move more of transportation from a two-dimensional experience to a three-dimensional one while reducing the industry’s carbon footprint.

Some 250 participants gathered in Bentonville, Arkansas, June 6 through 8, for the invitation-only fifth UP Summit. Dubbed the “Davos of mobility," the meeting was part think tank and part showcase with the goal of discussing how to decarbonize transportation, which is reported to contribute about 30 percent of the carbon that is believed to contribute to climate change.

In the audience were billionaires and bureaucrats, including multiple members of the Walton family, founders of Walmart, which is headquartered in Bentonville. Former FAA administrators Marion Blakey and Steve Dickson, along with Arkansas Gov. William Asa Hutchinson, also attended. Hutchinson has been bullish on making Arkansas a center for advanced mobility and formed the Arkansas Council on Future Mobility earlier this year. He asked Cyrus Sigari to head the group. Sigari and his longtime friend and business partner Ben Marcus are among the founders of UP.Partners, which is the organizer of the UP Summit. UP.Partners is managing a $230 million venture capital fund to identify and support “pioneering entrepreneurs who are creating technologies that help move people and goods cleaner, faster, safer, and lower cost—on the ground, in the air, over the oceans, and in space.”

The summit is a place for those who have received some of that capital to show their progress and for those hoping to get some capital to make their case for investors. The format wasn’t exactly Shark Tank, but closer to TED Talk, with entrepreneurs and company leaders given about 15 minutes each during two densely packed days to showcase their work.

Previous UP Summits have led to new partnerships, companies, and products. This year, numerous new products and product advancements were announced. ZeroAvia, which is working to create hydrogen-powered aircraft, announced that Monte Aircraft Leasing will purchase up to 100 ZeroAvia powertrains to be installed on existing and new Cessna Caravans, de Havilland Canada Twin Otters, Dornier 228s, and HAL-228 aircraft.

The prospects for hydrogen propulsion were a frequent topic during the event. Universal Hydrogen and Connect Airlines announced that the airline had placed an order to convert 75 ATR 72-600 regional airplanes to hydrogen powertrains. During a panel discussion led by Marcus, executives from Textron’s Pipistrel, ZeroAvia, and Universal Hydrogen, agreed that hydrogen propulsion through fuel cells is a way to decarbonize aviation for large, long-range aircraft, noting that batteries won’t scale to support such operations. They acknowledged that there are significant infrastructure and environmental hurdles to clear, but they are developing plans to get past those. 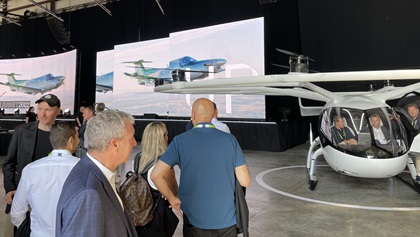 Also during the show, German manufacturer Volocopter announced that its four-seat VoloConnect aircraft made its first flight in May. The new model joins the two seat VoloCity and VoloDrone models, which flew previously and are also still in development.

Not to be outdone, Beta Technologies made several flybys of the event in its Alia fixed-wing pusher electric aircraft, showcasing how quiet the six-place airplane is. It had flown multiple legs to Arkansas from the company’s home base in Vermont.

Electra Aero Inc. announced that it has acquired Airflow.aero, both companies developing “blown-lift” technology for their respective ultra-short takeoff and landing aircraft. Blown lift refers to using multiple electric motors along the wings’ leading edges to distribute propulsion and to use the propwash and flaps to decrease takeoff and landing distances to distances as short as 100 feet.

James "JP" Stewart, vice president and general manager of Electra.aero, believes a shorter path to certification and market acceptance can be had by using a hybrid propulsion solution while battery technology matures. His company's nine-passenger vehicle will be powered by a small turbine power unit that will drive the electric motors along with a small battery pack. During cruise, the turbine engine will recharge the batteries to assist with landing. It will have a range of 500 miles and can carry about 1,800 pounds of payload at cruise speeds of 175 knots at 10,000 feet.

Zipline, an established drone manufacturer that has been moving blood and health care products in Ghana, Rwanda, and other countries in Africa, announced it has been secretly testing an acoustic-based aircraft avoidance system for more than six months on thousands of flights. The Detection and Avoidance (DAA) system, developed after years of research and testing of various aircraft noise signatures, can detect an aircraft—by make and model—within a two-mile radius of one of its drones, allowing the drone to maneuver to avoid a conflict. “DAA is the linchpin of scaling instant delivery in the United States and globally,” said Keller Rinaudo, founder and CEO of Zipline. “We envision a future in which this system becomes the industry standard for all commercial autonomous aircraft to fly safely.” The hardware has already been built into Zipline’s drones and is ready to be activated for use in many regions upon regulatory approval. 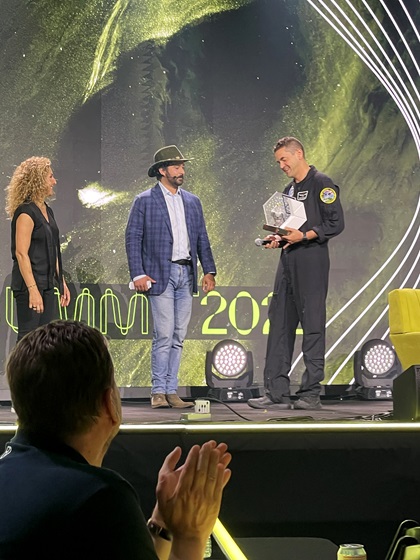 Rinaudo said Zipline’s drones have been operating in all sorts of weather, including thunderstorms, dust, and snow. In addition to Africa, the compnay has been operating near Bentonville and will soon have 28,000 stock-keeping units in its system from Walmart and will be expanding its delivery options.

Adam Woodworth, CEO of another established drone operator, Wing, a sister company of Google, reported that the company has thousands of drones operating in Australia, making 100,000 commercial on-demand deliveries near Logan City—about 2,000 to 4,000 per week. Like Zipline, Wing uses biodegradable parachutes or ziplines to drop goods at the appropriate address. Woodworth said using drones for simple deliveries removes trucks from the roads. “We have a big impedance mismatch between [small, lightweight] packages and [large, heavy] delivery vehicles.

“We’re safer, cheaper, and more sustainable. We’re done with the ‘what is it?’ This is real.”

Of course, mobility comes in many forms—in some cases it is otherworldly. Jaret Matthews, founder and CEO of Astrolab, showcased the company's moon rover. The gangly machine can move astronauts and/or about 3,300 pounds of gear on the lunar surface. Later this year a robotic arm will be added to further improve its versatility. Matthews said he expects it will be on its first mission in about 2025, most likely on SpaceX Starship.

Not quite so out of this world—but close—was the description of the Venus Aerospace Stargazer hypersonic spaceplane, which will take off and land like an airplane and at high altitude—about 50,000 feet or so—will light a rocket to propel it up to about 170,000 feet, where it will cruise at about Mach 9, gliding with its dozen passengers down to the other side of the Earth in about an hour. The company plans to fly an experimental vehicle to Mach 5 in 2023, fly a Mach 7 drone in 2025 or 2026, and have a Mach 9 transport by about 2030. The company has attracted the attention of the U.S. military, which is seeking hypersonic solutions in the wake of recent news of Russian and North Korean hypersonic missiles.

More down to Earth, but equally intriguing, was a presentation about the Regent Viceroy Seaglider, which flies a wingspan over the water, riding on “water” effect just above the surface. The vehicle rises out of the water on retractable hydrofoils—including riding through waves of three to five feet with little problem, according to co-founder and CEO Billy Thalheimer. The 12-passenger all-electric Regent has a range of about 160 nautical miles, cruises at 160 knots, and is designed to move people and goods between major cities along the coasts. As with others, it uses blown lift to improve performance and maneuverability. Hawaiian Airlines is a design partner with the company for the 12- and 100-passenger variants. Thalheimer said he expected to have a quarter-scale version of the 12-passenger variant testing on the water soon. 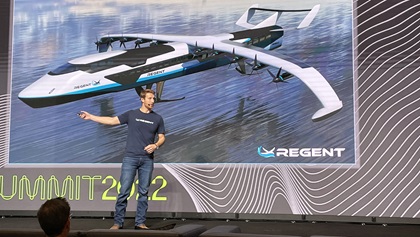 A lot more sporty is the Alauda from Alauda Aeronautics. The single-place electric speedster is the vision of Alauda founder Matt Pearson, who believes that “flying car” races are the way to increase interest in the advanced air mobility market while also leading to improved products. He pointed out that motorsport racing helped launched prominent car brands including Ford, Fiat, Mercedes, and many others. To foster that he has created the Airspeeder race series, which quietly conducted its first race in the desert in May. A documentary about the race and the development of the vehicles is expected to debut this summer, a move Pearson hopes will drive further investment and inspiration for a race series with multiple levels, such as Formula One and Formula Two auto racing. The May race was conducted using remotely controlled aircraft. Ultimately, he sees the “flying cars” as carrying pilots, allowing the effort to capture some of the motorsport sponsorship revenue while proving to the public the viability of such vehicles for daily use, just as happened with automobiles in the early 1900s.

Funding and managing such startup projects can be daunting, which is why UP.Partners announced at the summit that it was launching UP.Labs, a program staffed by professional investors and business executives who can help startups and expanding legacy companies to manage innovative projects. Its first client is automaker Porsche, which shared some 260 problem statements with the UP.Labs team. The team will work to find and help fund solutions for some of those problems, in some cases forming new companies to solve the problem—new companies that can stand alone and assist other companies with similar problems. As part of its investment strategy, UP.Partners will own a piece of the new companies, as will the executive team at those startups.

If that seems like a long-term project, it is. In fact, the notion of long-term thinking was a theme of the summit, with numerous experts encouraging entrepreneurs not to focus on annual progress, but instead to think about 10-year horizons. “We often overestimate what we can do in a year, but underestimate what we can do in 10 years,” advised Sigari.

The next UP Summit will be in 2023 at H. Ross Perot Jr.’s ranch outside of Dallas. 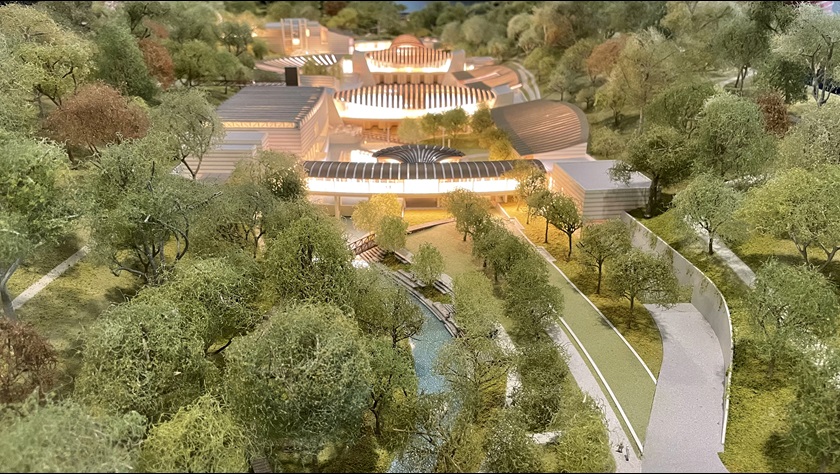 Contributor (former Editor in Chief)
Contributor and former AOPA Editor in Chief Tom Haines joined AOPA in 1988. He owns and flies a Beechcraft A36 Bonanza. Since soloing at 16 and earning a private pilot certificate at 17, he has flown more than 100 models of general aviation airplanes.
Go to Thomas B Haines's Profile
Topics: Financial, Experimental, Advanced Air Mobility 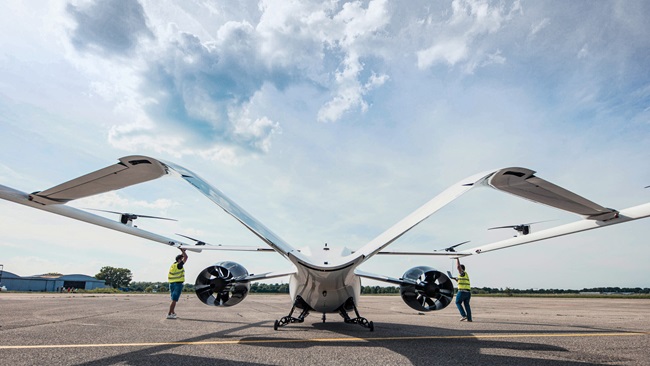 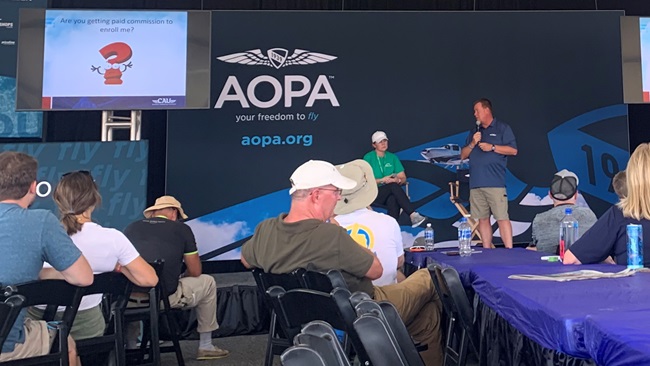 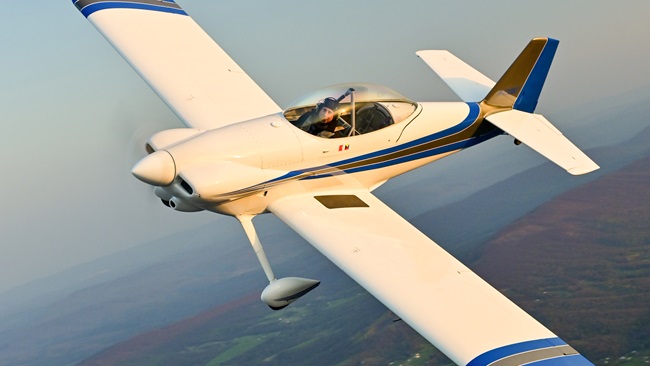