Get the app Get the app
Already a member? Please login below for an enhanced experience. Not a member? Join today
News & Media The thrill of the find

The thrill of the find

Both pilots had approached the field with trepidation. The 172 overflew the grass strip ensuring the field was clean and the pilot understood the approach—a road and the placement of the windsock seemed to indicate the strip was shorter than anticipated. 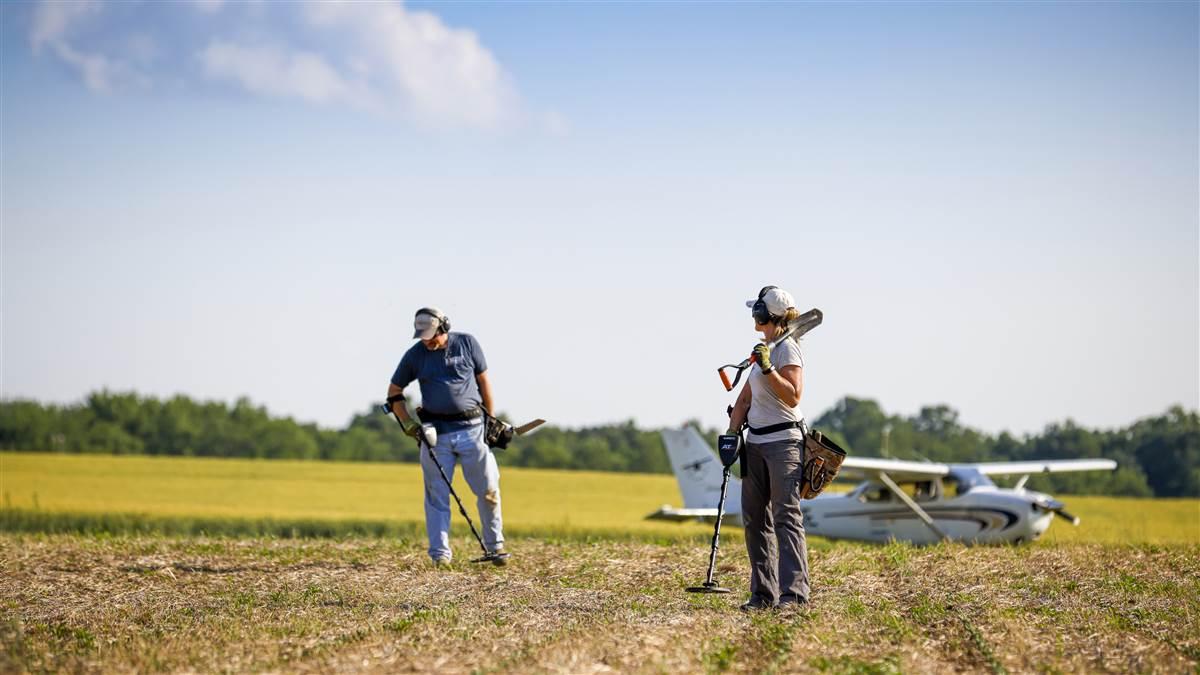 After the low approach, he came in a little high and fast but plopped the Cessna on the ground short of the road and sock, only then realizing the strip extended well beyond the road and he’d had plenty of room.

The Van’s RV–12 pilot also took his time, doing the same reconnaissance and electing to go around. He added flaps and glided onto the field smoothly and with even more room to spare. And, yes, it was me who said, “That was better than I expected.”

Of course, newly minted pilot and AOPA videographer Paul Harrop heard me over the landowner’s mobile. This was Harrop’s first time landing on a grass strip and I hadn’t meant to be critical. I may have landed on grass strips in Africa, South America, and the desert Southwest, but I’ve never actually piloted the aircraft, so I can hardly be a critic.

I was impressed by the landings of both pilots, colleagues from AOPA. Senior Director of Outreach Chris Eads and his wife, Sherri, and Senior Photographer Chris Rose were together on this hot summer day to enlighten me on their aviation-assisted hobby—metal detecting on remote fields around the mid-Atlantic states. Would Harrop and I be the next new treasure hunters?

The privately owned, well-maintained 2,400-foot grass strip where we have landed is on farmland owned by career pilots whose grandfather established it in the 1960s because the land reminded him of his birthplace in Germany. Situated along a river and with foundations and topography that promises the possibility of historic artifacts on its 800-acre footprint, we have arrived to treasure hunt here.

We band of brothers

Rose has been regaling me with stories of his hunt for ancient artifacts for years. I sort of hooked him up with Eads, whom I knew to have a passion for Civil War history. Eads in turn introduced metal detecting to his wife, Sherri, who has taken to the hunt with even more passion than the two Chrises.

“It humbles you. You realize you are just a tiny spec in the big picture of life. Flying and metal detecting make me think about life. How other people lived before us, how the sky makes me feel small, but I see so much of the world. It’s a great escape and it regrounds us,” said Sherri.

And here I only thought of metal detecting as that weird thing my teenage brother did at the beach or what old men in black socks and sandals did when they retired.

So what are my seemingly not-embarrassing colleagues doing out here in the hot sun, black flies buzzing around their heads, and snakes surely only inches away (this, of course, is an idle threat presumably but I hate snakes and can imagine them anywhere, especially outside). I watch my friends as they spread out across a newly planted soybean field, delicately sidestepping the new growth, swinging their detectors across the ground, heads down, until one hears that chirping sound, and cries, “I have something!”

In the Briar and Bramble

Looking for like-minded adventurers like yourself? Or people who share your passion, vocation, or interests? Try the AOPA Flying Club Finder to find a flying club in your area.
aopa.org/flyingclubfinder

Are you older? How about the United Flying Octogenarians?
ufopilots.org

Or do you love the backcountry? How about the Recreational Aviation Foundation?
theraf.org

Whatever your interest, find a group to share it with. There are type clubs in which you share your favorite aircraft—or the one you own, military career associations, and much more.
aopa.org/community

Rose has found coins, buttons, and bullets. His most remarkable find is a Roman coin he was able to determine was more than 800 years old. Sherri found a 1774 King George coin, and Eads is most proud of a Civil War eagle breastplate from a soldier’s uniform. “The brass plate on their cartridge sash was shiny and gold—a perfect target. So many soldiers tore them off their uniform. I found it in a neighbor’s yard.”

Each of our group has a wish-list item they would like to find: Sherri wants to find a thimble as her interest in the lives of the people whose history intrigues her is symbolized in that basic necessity of life, when even a young soldier had to sew his own buttons on his uniform. Her husband would like to find a coin that has the date of the American Civil War (1861-1865) as that would personalize that time in history for him. (“It would be a good chance it had been in a soldier’s pocket.”) And Rose wants to find a campaign button from George Washington’s inauguration, which he says is very rare but has been found in this area. Today, Sherri finds the top half of a thimble in the soybean field.

Metal detecting isn’t particularly expensive. Rose says once you have the basic equipment, you’re set. He has several detectors, the oldest and his most reliable from 1998. The cost can be from $150 for a basic metal detector to $1,000 for a set that includes headphones (how you hear that chirping sound), a digger (small shovel), pin pointer (a mini detector for when you’ve found a site), gloves, and magnifier. Metal detectors can even be waterproof.

The metal detector must be in a constant swinging motion. An electric coil sends a signal that it has detected something and there are different tones for different metals. The detector identifies what the type of metal a find might be—a high signal is something worth digging and the lower sounds on the detector usually indicate the target is high in iron and potentially less desirable, Rose says. Once home, Rose will crowdsource or go to online forums with photos of his finds. “Within a couple of hours, I usually know what it is I have found,” he said.

As for how the airplane fits into this story, Eads articulates it best: “As a private pilot I have the platform to get into places most people cannot. It allows us to travel, which we love; it allows us to experience the joy of flying; and it merges the ability to survey land from above.”

When flying over fields or empty land spaces, they can see the contours of the landscape, what might have once been a road or a foundation. Eads cross-references the sectional on his iPad with Google Earth images and then looks at tax records to see who the land belongs to. Rose takes photos from the air and overlays them on old maps. They approach landowners with respect and realization that most probably won’t appreciate their hobby. “You can knock on 10 doors and only one will probably say they don’t mind,” said Eads. “A lot of our connections are through the aviation community. I love hearing an aviator say, ‘There used to be…’ something on their property—and that I should fly over sometime.”

The rest of the story

As the sun starts to think about turning down the heat and some of us contemplate happy hour, Harrop packs up his gear and heads to the RV–12. He makes a graceful exit over the field, wagging his wings at the group on the field, and heads west over the Chesapeake Bay, another first for him—flying over that amazing expanse of water (he’d flown north and down on his flight here).

I, the packhorse who carried some of the equipment in my car (although the basic equipment fit just fine in the 172), start out for what should be a two-hour drive home. I wave goodbye to the trio who seem in no mood to stop hunting even though they have been bent over the fields for more than four hours.

“It’s addicting. It’s the thrill of the find. It’s retracing history. It reminds us of the people and how they lived, and what they went through. We get a sense of connection, of their story and our story,” Sherri says.

Traffic snarls on my way home and it takes nearly four hours. As I come over the Route 70 hill into Frederick, the 172 buzzes over my head and I see that my friends have made it home before me. 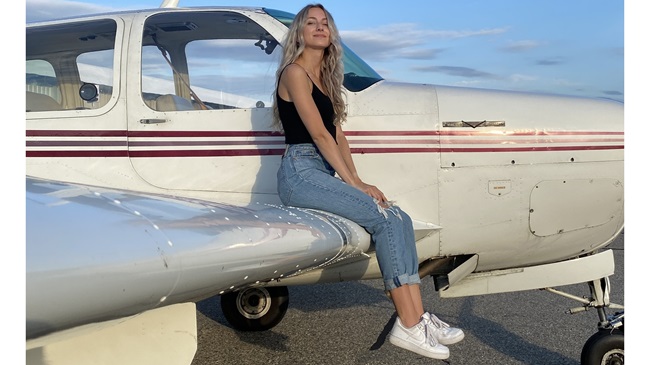 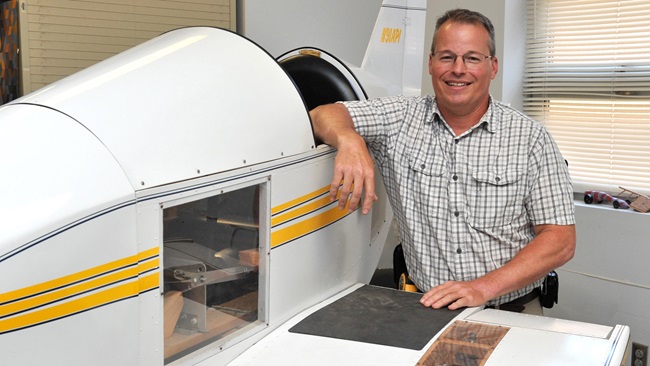