Get the app Get the app
Already a member? Please login below for an enhanced experience. Not a member? Join today
News & Media Flying Farmer Charlie Kulp was 96

Charles A. “Charlie” Kulp, a seasoned pilot who camouflaged his considerable aviation skills behind the bumbling Flying Farmer airshow routine where he “accidentally” took off, learned how to fly, and then miraculously landed a wayward 65-horsepower Piper J–3 Cub, died October 17 at age 96. 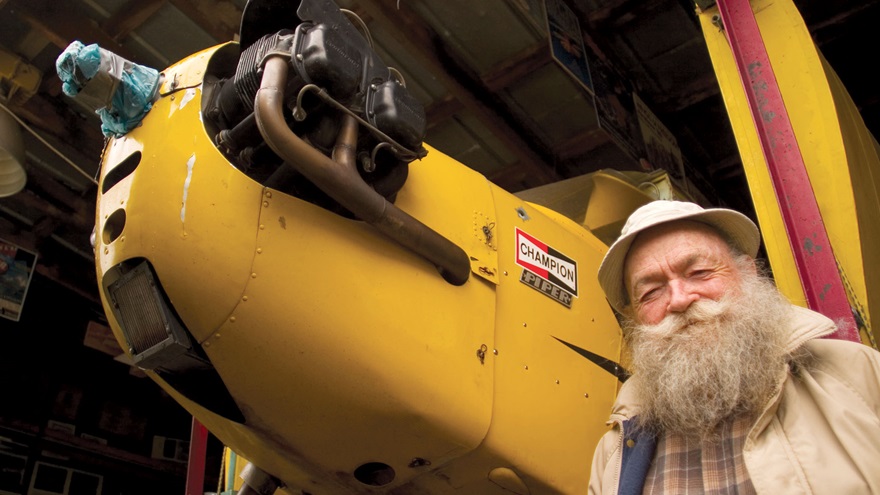 "The Flying Farmer" airshow performer Charles "Charlie" Kulp, of Virginia, who pretended to learn how to fly a Piper J-3 Cub in a flying-comedy routine that spanned decades and delighted thousands, died at age 96. Photo by Tim Wright.

The bearded, bespectacled Kulp spent the better part of four decades in a straw hat and denim overalls perfecting the act. His performances typically began with Kulp sauntering up to a parked aircraft before beating it with a stick, bear-hugging the vertical stabilizer, then jumping into it and taxiing away—seemingly out of control—while the “real pilot” chased after him.

His airmanship with the low-horsepower Cub allowed Kulp to fly it in flat, skidded turns, dance precariously close to single-wheel ground loops before leveling the aircraft, climb it above treetop level and roll inverted, dive toward the deck, and then gently set it down during flawless wheel landings, much to the crowd’s delight.

Kulp’s 2009 induction into the International Council of Air Shows Foundation Hall of Fame recognized his airshow routine of duping spectators into “believing that he was not a pilot and had accidently taken off,” before somehow managing to wrangle the aircraft safely back to the ground.

The founding member of the Flying Circus Airshow performed in the taildragger more than 800 times during airshows that took him from Kulp’s Bealeton, Virginia, home base to EAA AirVenture’s grand stage in Wisconsin, the Sun ‘N Fun Aerospace Expo in Florida, the Old Rhinebeck Aerodrome in New York, and multitudes of small airfields throughout the United States. Kulp averaged 36 slow-speed, low-level, cross-controlled aerobatic performances a year until he hung up his overalls in 2008.

The World War II U.S. Navy mechanic took his first flight lesson at age 16; earned a pilot certificate in 1943; and added commercial, CFI, and designated pilot examiner credentials. He later added an A&P certificate, restored several vintage airplanes, and donated them to the Smithsonian National Air and Space Museum. He was presented an FAA Charles Taylor Master Mechanic Award for 50 years of outstanding maintenance skills. During a lengthy aviation career, Kulp managed small airports in Maryland and Virginia before settling down at a private strip near Warrenton-Fauquier Airport in northern Virginia.

His daughter, Joanna, recalled that her dad loved to tinker, respected wildlife, treasured his friends, and encouraged many young people to “follow their own passions skyward.” She wrote in an email that despite Kulp’s “sometimes abrupt manner and gruff exterior, he was a kind and gentle man who loved his children, enjoyed gardening and noted that he took pleasure in nourishing deer, birds, and squirrels from feeders that he sometimes fashioned by hand. She confided that Kulp once built a car “out of Cub parts but failed to put a shutoff on it. Afraid he was going to run into a row of planes, he reached back and grabbed the sparkplug with his bare hand” to cut the engine.

In 1997 Kulp’s lifelong love of sharing aviation with others landed him in the Virginia Aeronautical Historical Society’s Hall of Fame. The society wrote that Kulp was “widely admired for his quiet, gentle personality and his appeal to hundreds of youngsters he has introduced to aviation. He is truly a Virginia Ambassador-of-Aviation.”