Get the app Get the app
Already a member? Please login below for an enhanced experience. Not a member? Join today
News & Media Mentor Matters: The trouble with tab data

Runway slope and other curveballs

Pilots who have been out of initial training for some time often fall into patterns and habits not squarely in line with how they were trained to operate their aircraft. 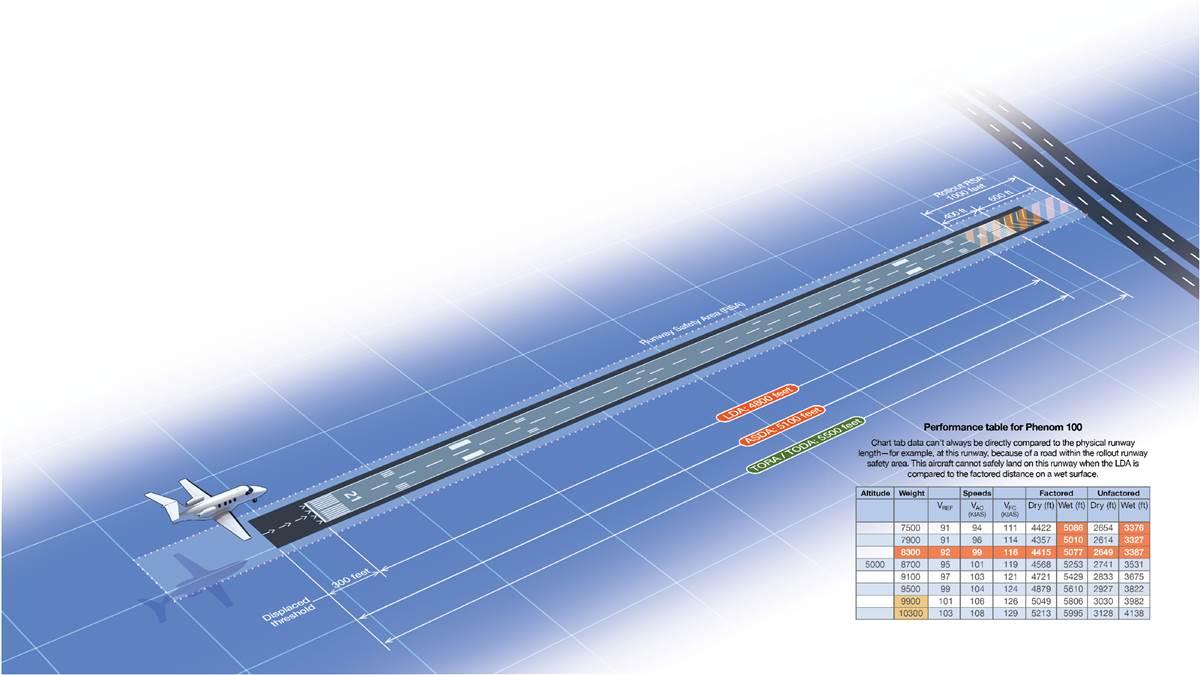 Day in and day out, though, these work-arounds and shortcuts function just fine without negative repercussions, and so they become entrenched. Performance calculations become a broadly truncated discipline in which simplified work flows may appear adequate on the surface, all the while exposing the pilot to unseen hazards. Habitual use of the airplane flight manual (AFM) tabulated performance data (tab data) for takeoff and landing could omit critical considerations.

Use of performance tab data is recognized as a compromise solution that trades speed and convenience for precise calculations. For conservatism’s sake the pilot is directed to round up variables to the next higher category on the chart; often this is not an issue, as light jets typically require far less runway than exists at any decent-size general aviation airport (especially for dry runway operations). If the pilot has to round 22 degrees Celsius up to 25 degrees Celsius, and a pressure altitude of 400 feet to 1,000 feet, the extra 100 to 200 feet required just won’t matter when taking off from a 5,000- or 6,000-foot-long runway, as the margins are so large. Because of this, pilots can become acclimated to using tabulated takeoff data—and forget the limitations that become critical when the aircraft’s performance demands are closer to the actual runway length.

The biggest issue overlooked during a quick reference to tab data is runway slope. The two largest light-jet manufacturers both predicate the tabulated AFM takeoff and landing data on zero slope. Textron/Cessna provides fixed multiples for landings on downhill runways of minus 1 and minus 2 percent, but for takeoffs on non-level runways the pilot must use a slope correction table and adjust performance based on multiple variables. In contrast, Embraer simply sends the pilot to a PC-based software program if the effect of slope needs to be calculated for either takeoff or landing—simple in theory, but not so easy in the cockpit during a busy approach.

To make matters worse, when pilots are presented with a table or correction factor, the adjustment they are told to use must be valid for the most adverse combination of conditions for which the aircraft is certified. Take a Cessna Citation Mustang pilot landing on a minus-2-percent downslope. The pilot is directed to multiply the flat runway result by two to find the required runway, as in the most adverse combination of winds, temperature, pressure altitude, and weight it was found the aircraft needed twice as much to stop on a minus-2-percent slope as on a flat runway. However, for most landing conditions the airplane will need far less—on the order of 40 to 50 percent more runway, not 100 percent more. But in using the tab data the pilot is again trading speed for accuracy.

Conservative data is better than no printed data at all, however. Consider instead a Phenom 100 pilot setting up for a landing at the Sedona Airport in Arizona with rain in the area. Let’s say he or she has forgotten that tabulated landing data is only valid on a flat runway. Sedona’s single Runway 3/21 is 5,132 feet long, with a pronounced downslope of 1.8 percent if landing on Runway 21. While the pilot may naturally prefer to land uphill, if the winds are of any strength from the southwest the 10-knot tailwind limitation will require a landing into the wind on Runway 21. The quick reference handbook (QRH) indicates that landing on a wet runway will work out fine for the pilot: The “unfactored,” or test-pilot-flying-a-new-airplane-best-case, runway required is 3,387 feet, and even using recommended safety factoring the 5,077 feet of runway required is still just less than the runway available.

When using a comprehensive runway analysis program that adjusts for all variables—most critically the downslope—the story is very different. Even with 10 knots of wind down the runway, the actual unfactored runway required is 3,851 feet, 500 feet more than the (incorrect) 3,387 feet shown in the QRH. Using a conservative safety factor, the runway required jumps to more than 6,400 feet, significantly more runway than is present. With all the proper data in hand, the pilot would come to a very different conclusion regarding the safety of attempting the landing.

The other major way in which tab data can lead a pilot into hazard relates to the critical, but too often overlooked, issue of declared distances. A declared distance is the amount of runway the pilot is allowed to use for performance calculations, which can be less than the actual pavement length. Pilots are most familiar with landing distance available (LDA) as a declared distance, being aware a displaced threshold will limit how much runway can be used for landing performance calculations. However, a hazard—such as a nearby road—in the thousand-foot runway safety area (RSA) at the end of a runway can limit both the landing and takeoff declared distances, and more digging is required to ensure this limit is being observed. Simply pulling out a tab chart that shows 4,800 feet is required for takeoff, and comparing it to the airport diagram showing the runway is 5,000 feet long, may lead to an illegal as well as potentially unsafe takeoff.

Just because pilots aren’t using a printed chart doesn’t guarantee they’re free from these tab data traps. Some popular electronic performance calculators, at their core, use the same raw tab data we find in the manuals. A popular iPad app used by Phenom pilots, for example, is only a repackaging of the tabulated data, and cannot compensate for any of the variables missing from the paper manuals. It will return the same results for landings on a minus-2 percent, zero, or plus-2 percent runway, potentially luring pilots into an unsafe situation if they don’t understand the software’s limitations.

Similarly, while many light jets feature a flight management system (FMS) that calculates takeoff and landing speeds and distances with no reference to the paper manuals needed, the precision of these calculations varies with respect to the same issues we see with tab data. Some FMSs don’t automatically load slope information for runways, but they can calculate the performance change if the slope is manually added; some include slope calculations automatically; and most confusingly, some will automatically load slope data at some airports but not others. Similarly, older software loads of a common light jet FMS did not adjust the runway distance for shortened declared distances while more recent loads do.

It’s clearly critical if using FMS or other software-based performance calculations that the pilot verify and understand exactly what parameters are being used by “the box” before accepting the data. Similarly, pilots must examine the way in which they use their tab data and verify it complies with the manufacturer’s instructions. This may require multiple steps and charts to accurately compute a performance requirement.

Given the extra time needed to properly complete a tab data calculation, pilots may realize the perceived time savings is an illusion, after all. While comprehensive performance software that encompasses all variables, such as third-party runway analysis programs, may require some up-front time to become fluent in operation, once mastered, the day-to-day calculations will be both more accurate and faster.