Get the app Get the app
Already a member? Please login below for an enhanced experience. Not a member? Join today
News & Media Aviators unite in support of two teen Piper Cub pilots

Maryland pilots rallied to provide 18-year-old Piper J–3 Cub pilot Ben Templeton meals, a place to stay, a full tank of fuel, and the camaraderie of the aviation community after a planned Virginia airport overnight was denied during the first leg of an ambitious 48-state journey that began at Triple Tree Aerodrome in Woodruff, South Carolina.

“I’m buying you dinner, Ben,” said CFII Keith West, who scrambled from delivering an instrument flight lesson to help tie down the aircraft after Templeton covered about 400 low-and-slow miles over the backbone of the Appalachian Mountains, and arrived at Frederick Municipal Airport in Maryland, the home of AOPA.

“If you don’t have plans for breakfast, you do now,” said Les Smith, a Mooney pilot who was at a hangar helping a friend with a balky starter when he learned about Templeton’s dilemma.

A member of the Westminster Aerobats Flying Club volunteered a comfortable couch for snoozing.

Templeton and his father mow the grass at the 7,000-foot-long turf airfield and help with other maintenance chores, so they were present when Triple Tree Aerodrome patriarch Pat Hartness suggested the multistate flight could spur general aviation awareness among youth. Templeton agreed. “I thought it was a good idea, and a good way to build time” while promoting programs that include the airfield’s Aviation Centered Education program for young people. “The more kids you can get flying” now, “the more people you’ll have in 20 years,” Templeton reasoned. 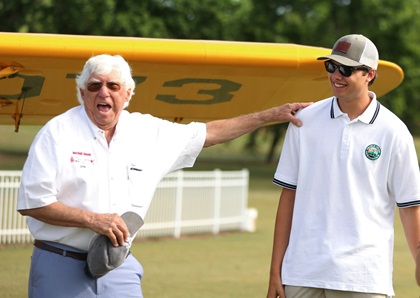 Templeton launched the 100-airport, 8,300-mile journey on June 1, the same day most of his classmates walked across the stage to collect their high school diplomas. He flies radio control aircraft for fun, soloed on his sixteenth birthday, and earned a pilot certificate at age 17. After completing the 60-day journey, Templeton said he plans to pursue aviation management at Middle Georgia State University.

The names of donors, sponsors, and states he plans to visit are stenciled across the Cub’s fabric as a reminder of Triple Tree’s mantra of spreading “fun, fellowship, and hospitality.” The lanky teenager said he generally plans two-hour flights before landing to stretch, refuel, and hand-prop the 75-year-old 1946 Piper. “Most of the time it’s comfortable,” but “it can get tight in the back seat,” he admitted.

Templeton said an AOPA headquarters visit was mandatory for him because he wanted to “see where everything started.” A leisurely mid-morning second-day arrival was planned before things went awry after visiting seven states on the first day of his epic journey. 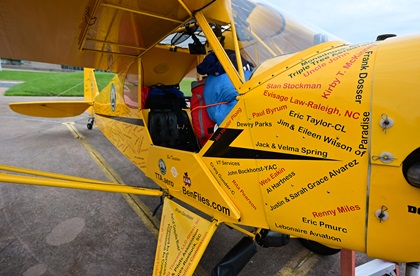 Before leaving, Templeton offered suggestions that aviators can use to help build the pilot community in their own backyards. “If you see a kid at an airport, talk to them [because] they’re there for a reason. And if you see anybody who shows interest, help them out, take them flying, show them what aviation is, and how much fun it can be.”

He will be accompanied by his father and CFI Eric Zipkin, who will fly the family’s Cessna 180 Skywagon as a chase aircraft during the 5,000-mile journey, keeping an eye on the non-electrical-system-equipped vintage Cub and adhering to Part 61 solo endorsement regulations.

A summer glider camp at Sugarbush Soaring in Vermont opened Zipkin’s eyes to ways the aviation community could become stronger and more inviting to those who haven’t yet been exposed to GA aircraft. “That was one of the first places where I felt like there were really a lot of young people just as into flying as I was.”

Zipkin decided there should be an aviation organization specifically for young pilots and stressed that diversity and inclusion were paramount to growing the future pilot community. He now counts nine active Young Pilots USA chapters of high school and college-age aviators in seven states, with immediate plans to add chapters in seven additional states. Currently, about a dozen members participate in each active chapter.

“One of the things the pilot community struggles with is young people staying involved in aviation. It’s really not a complicated thing to set up this community group where people who are into aviation can come together” and share their experiences, Zipkin said during an episode of AOPA’s Hangar Talk podcast.

The journey from Goodspeed Airport on the Atlantic Coast to Flabob Airport near the Pacific Coast is expected to take between 15 and 20 days, depending on weather and other factors. 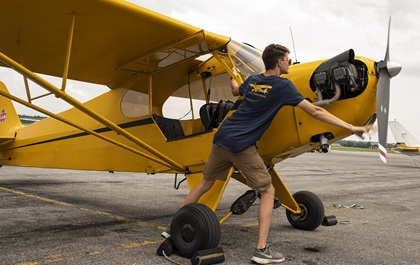 Zipkin said donations beyond covering expenses for the trip will be evenly distributed to the AOPA Foundation’s scholarship program, the Gary Sinise Foundation, and the Barstool Fund for businesses economically affected by the coronavirus pandemic.

“I wanted to make sure there was something a little bit bigger” than the flight itself to help the community. “First and foremost are scholarships for flight training. Several of our organization’s leaders are the recipients of AOPA flight training scholarships and we wanted to do whatever we could to direct some of that energy back at AOPA.”

The AOPA You Can Fly program includes high school aviation STEM curriculum, flying clubs, Rusty Pilots seminars, and flight training. The 2021 You Can Fly Challenge through the AOPA Foundation is currently underway.

He added that the Gary Sinise Foundation does “a lot of really great work with wounded veterans,” and the Barstool Fund “helps small business that have been hurt by this pandemic in the last year.” Zipkin stressed that the three partners were picked because “they make a difference” in their areas of expertise.

“The rough cost of the trip is about $5,000 and I’d like to raise at least a couple multiples of that … to make a significant difference” in people’s lives. “I’d like to do whatever we can, to really blow past that” amount of support. 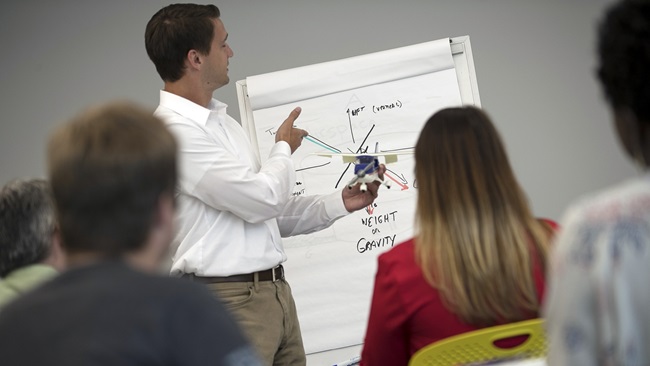 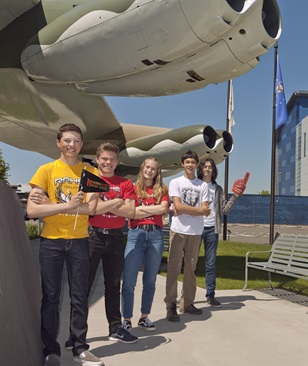 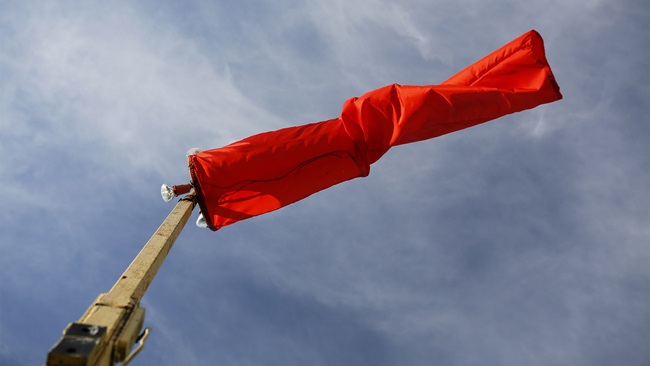 Training Tip: Getting to 'No'