Get the app Get the app
Already a member? Please login below for an enhanced experience. Not a member? Join today
News & Media System rundown: FCUs and engine-outs

Getting wise to a PT6 fuel control unit gotcha

Turbine engines create power by ingesting huge amounts of air and compressing it to burn in their combustion chambers. 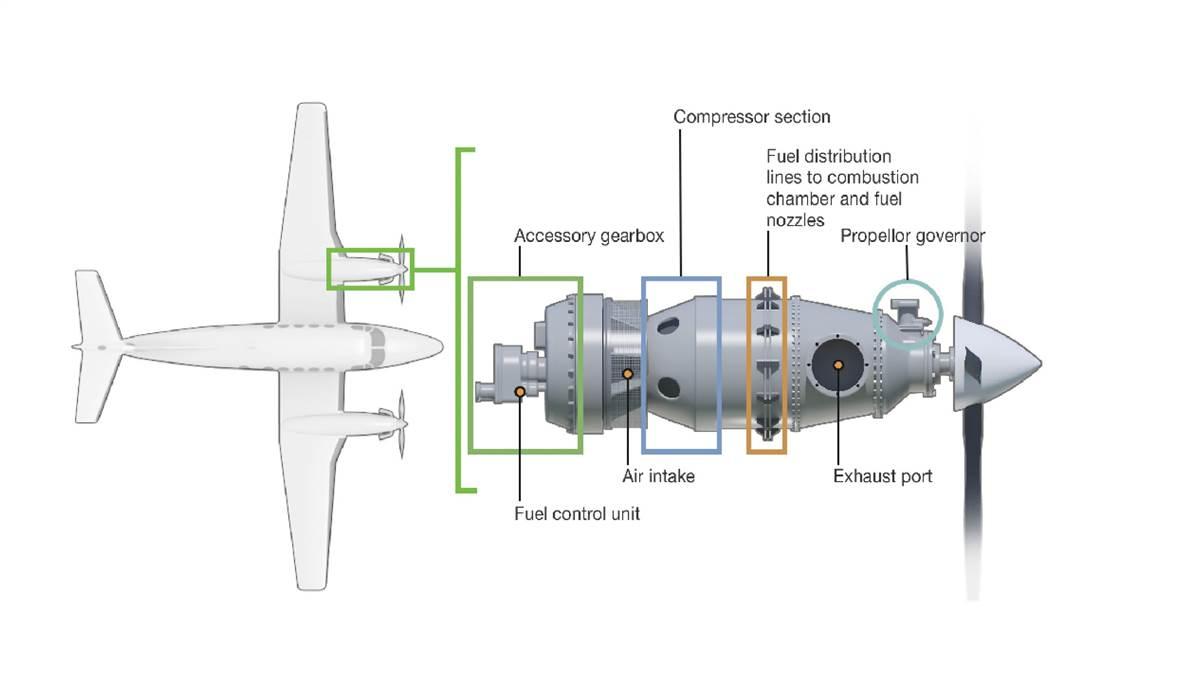 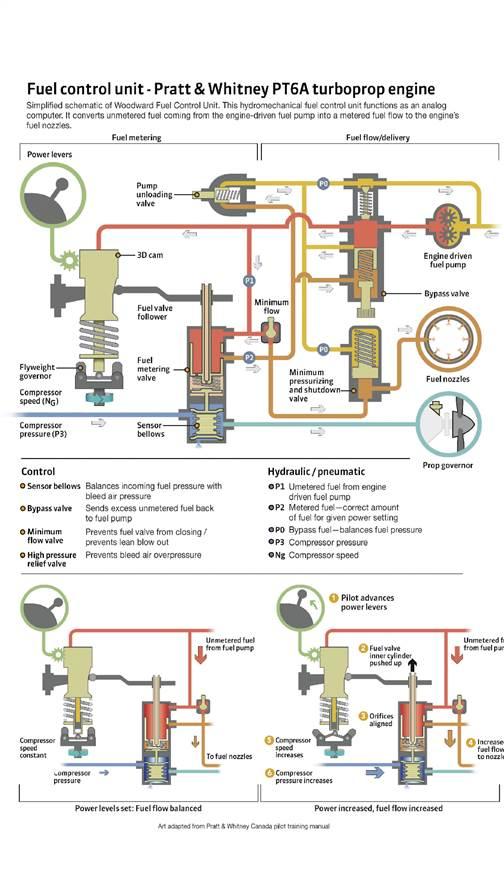 They take in so much air, and create so much power, that some of the compressed air can be siphoned off for use in airplane systems, often without significantly detracting from performance. This extra air—called bleed air—is tapped off stages of the engine sections and can be used to pressurize the cabin, inflate deice boots, heat leading-edge panels, and even inflate door seals.

In Pratt & Whitney’s PT6A series of turboprop engines, compressor bleed air plays a critical part in delivering fuel to the engine. PT6 engines equipped with Woodward Inc.’s fuel control units (FCUs) use bleed air to send measured amounts of fuel to these engines’ combustion chambers. Tucked away on the engine’s accessory gearbox, the FCU is small, efficient, and reliable. But it’s also complex. Some might say it has its Rube Goldberg-esque qualities.

The FCU’s main job is to take unmetered fuel coming from the engine-driven fuel pump and convert it into a metered fuel flow to the engine’s fuel nozzles. In other words, to deliver the correct amount of fuel for a given power setting. Sound simple? It isn’t. The FCU’s operation depends on a complicated balance of variables.

The FCU uses a diaphragm-and-spring setup. Incoming fuel pushes the diaphragm one way, and the spring—which encloses a bellows fed by bleed air—pushes against it to maintain the desired fuel flow to the engine. This way, incoming fuel pressure balances incoming bleed air pressure. Meanwhile, to prevent an excess amount of unmetered fuel from entering the FCU, there’s a bypass valve that sends it back to the fuel pump. And to prevent any bleed air overpressure situations, there’s a relief valve.

As for running the metering valve, the FCU uses twin concentric cylinders, one nesting within the other. Each has an orifice, and fuel flow to the engine depends on their relative positions. When the pilot adds power, increased bleed air pressure makes the spring/bellows mechanism expand, causing the inner cylinder to rise and the orifices to slide together, creating a bigger passageway for the fuel. Pull back on the power lever and the cylinder moves down, moving the orifices out of sync and reducing fuel flow. The pilot increases or decreases a bleed air-generated fuel flow from the FCU each time he or she advances or retards the power lever(s).

Tucked away on the engine’s accessory gearbox, the FCU is small, efficient, and reliable. But it’s also complex. Some might say it has its Rube Goldberg-esque qualities.These FCUs have been providing reliable service for years, but remember the spring mechanism? If there’s a bleed air leak, or a leak in the bellows, the spring will respond by collapsing—and send the inner cylinder downward. This moves the orifices away from each other, producing a sub-idle fuel flow. Engine power instantly drops. To the pilot, it looks and acts like an engine-out situation. In worst-case situations—such as a power loss immediately after takeoff—the pilot must quickly assess the problem, maintain control and airspeed, and flawlessly perform the engine-out checklist items in order to have any chance of climbing away safely.

This assumes you’re flying a twin-engine turboprop. You could argue that in a twin, having the operating engine could give you a fighting chance at saving the day. Trouble is, it’s common for pilots to spend several precious seconds in startled confusion. After takeoff, at low altitude, that would be a huge risk factor.

What if you’re flying a single-engine turboprop? Airplanes like the Daher TBM or Pilatus PC–12 series are equipped with a manual override (MOR) system. MOR provides a mechanical connection to the FCU through a separate MOR lever beside the conventional power lever. In case of a sudden, otherwise unexplainable loss of power, try using the conventional power lever to get an engine response. If that doesn’t work, unstow the MOR and advance it, slowly. There’s an unresponsive flat zone at the beginning of the MOR’s travel, but by mid-travel the MOR should bring the engine back.

Simcom Aviation Training, which provides simulator-based training for PT6A-powered Piper Cheyennes, Beechcraft King Airs, plus TBMs and PC–12s, emphasizes FCU failures in its pilot initial and recurrent courses. Engine-out procedures are reviewed, as well as MOR operations in the TBM and PC–12, and there are plenty of opportunities to experience sudden power losses in various phases of flight. To demonstrate FCU mechanics, Simcom instructors cut openings in two Styrofoam cups, then nest them together and move the cups to show how the openings match up. It’s a crude but effective learning tool.

FCU failures caused by bleed air leaks have been suspected in several post-takeoff engine-out accidents in turboprop twins. So far, the National Transportation Safety Board has yet to single them out as causes or factors. However, engineering analyses have drawn attention to FCU bleed air leaks as potential problems. The mere thought of a sudden power loss close to the ground, in a climb attitude and at climb airspeeds, ought to be enough motivation to warrant pilot education and practice sessions.