Get the app Get the app
Already a member? Please login below for an enhanced experience. Not a member? Join today
News & Media Quick Look: Beechcraft King Air 200 series

When any airplane has been in production for 45 years, it’s safe to say it has proved to be a winning design. 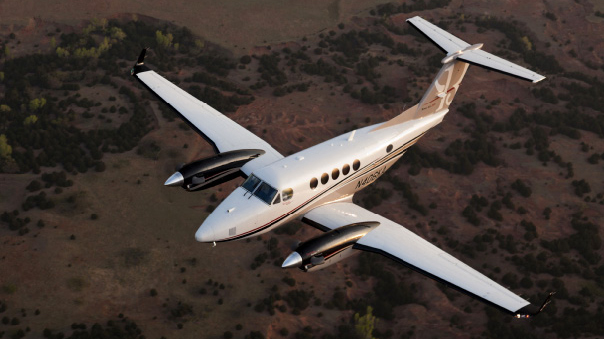 This is the case with Beechcraft’s King Air 200 series, which is produced today as the King Air 250. It is a well-built, fast, flexible, efficient turboprop workhorse for companies that need to move up to eight passengers and their gear on short to medium-length trips. Its beefy landing gear can tolerate relatively short, unimproved runways. On trips less than 500 nautical miles, the King Air 200 is not much slower than a jet but will burn far less fuel and can access small airports that many jets can’t. It doesn’t hurt that it’s a good-looking airplane, too.

When it was introduced for the 1974 model year, the 200 was known as the Super King Air; it kept that moniker until 1996, when “Super” was dropped. Pratt & Whitney PT6-41s creating 850 shaft horsepower powered the original 200. The B200 was introduced for the 1981 model year, using -42 engines with the same 850 shp but higher interstage turbine temperature limits—enabling the B model to hold maximum power to the high teens. The B200 also utilizes an electro-hydraulic gear retraction system, rather than the 200’s electrically actuated gear that dated back to the Twin Bonanza.

Early, unmodified 200s are good for 270 KTAS or more while the B200 can top out around 290 KTAS; 200s modified with upgraded engines can exceed 300 KTAS. Fuel capacity is 544 gallons, giving the 200 a 1,500-nm maximum range at high power. Full-fuel payload is limited, so partial fueling is the norm. Earlier, lighter airplanes can carry two or three people with full tanks while heavier, later models may only carry the pilot with full fuel. Seats-full range is 800 to 1,100 nm, depending on airframe weight.

Williams Cheng operates a 1979 200 and regularly flies long distances at 250 KTAS at Flight Level 270, burning 500 pounds of Jet A per hour. This gives him seven hours to dry tanks. He often flies from Denver to the East Coast nonstop and has one hour of fuel remaining. In 16 years he has never had a flight cancellation because of maintenance. Cheng says preventive maintenance is the key to reliability.

Cabin comfort is good and the typical setup is a single-club with two seats behind the cockpit and a potty seat at the rear. The cabin is slightly smaller than that of a Pilatus PC–12 but is shaped like a bread loaf, providing good shoulder room. Several large windows provide a sense of roominess and ample light.

Avionics are all over the map because King Air 200s have been in production for so long. Newer airframes are equipped with Rockwell Collins Pro Line 21 and the newest emerge with Pro Line Fusion systems. Multiple modifications are available to transform older models into airframes competitive with the new King Air 250. Upgraded engines and propellers, glass panels, ram-air recovery intakes, and wing lockers are the big-ticket mods.

While the Pilatus PC–12 has put a dent in King Air 200 series sales, many owners and operators still desire the performance, safety, and comfort of a twin-engine airplane. And with autofeather and boosted rudder in the event of engine failure, single-engine handling is relatively civilized. With the 200’s combination of performance, comfort, reliability, and value, it will continue its workhorse role for decades.