Get the app Get the app
Already a member? Please login below for an enhanced experience. Not a member? Join today
News & Media Beauty or the beast?

Beauty or the beast?

Let’s call him the airplane whisperer. If you’re not familiar with the term, it means someone who has an uncanny affinity for a subject.

Kyle Bushman has an uncanny affinity for airplanes.

He’s just 27 years old and has the face of a cherub (albeit a bearded one), but he’s the real deal when it comes to aircraft restoration. An A&P mechanic and avid pilot, Bushman apprenticed under Tim Talen, an Oregon-based antique aircraft restorer. When Talen wanted to retire, he looked at the kid who had been hanging out and working hard for his Ragwood Refactory for the past two years. He lent him the name for Bushman’s own factory in Creswell, Oregon. (The original Ragwood Refactory still does business in Jasper, Oregon, where it started in 1978; Talen says he “failed” at retirement.)

“It was obvious that he was anxious to learn everything he could about aircraft restoration and in particular, everything that goes into running an aviation business,” says Talen. “It was a rare commodity to have someone as young as Kyle was at the time, have great skills, a solid work ethic, and the enthusiasm inherent in people involved in aviation.” Talen says it was a simple decision to see the Ragwood Refactory continue under Kyle’s leadership.

“I learned so much at Tim’s shop just by showing up and trying something new,” Bushman says. “If you don’t try something, you won’t have anything to do. It taught me I’ll be learning for the rest of my life.”

Tell me your dreams

Bushman says working with Talen on restoring the handmade antiques of yesteryear taught him to not be afraid to re-engineer aircraft. “Tim bred in me the tube and fabric skills and the work of painting these hand-built aircraft. And that’s what it was—these were hand-built, flying was in its infancy. They [builders of the day] didn’t know it was wrong, so they tried things.”

Restoration became Bushman’s passion, but as he developed his own flying skills, the joy of backcountry flying enticed him. “People forget to have fun,” he says. “Flying is serious and we can’t take it lightly, but I think it’s important to show the fun side of aviation, and that’s backcountry flying.”

He realized that to ensure his company’s future, he needed to look to the backcountry aircraft and offer something beyond tube and fabric restorations. “I love making perfect aircraft and the bread and butter of this company will always be fabric work. To restore an aircraft is a fun thing, but a slow, rewarding process. I’m addicted to the process. I found I like saying tell me your dream and then going through the battle with them, getting into the trenches, for six months or two years,” Bushman says. “But I’m the young puppy dog and I want to try new things and see how to get out of the same old mold aviation has been stuck in.”

A tale of two owners

The two most recent and remarkable aircraft restorations Bushman has been consumed with for the past year illustrate the depth and breadth of his skills. Some would call them the yin and yang of restoration work—a high-end, no-expenses-spared certified restoration of a 1947 Piper PA–14 Family Cruiser and the Frankenstein re-engineering of a 1958 Cessna 175 Skylark under experimental/exhibition rules.

“The PA–14 is a testament to perfection and beauty; the 175 is all function, no form,” Bushman says. “The Beauty and the Beast.”

“I enjoyed supporting this mad scientist. He’d run upstairs, and I’d hear the whine of a saw and he’d come back down with some part and say, ‘Let’s try this,’” laughs Whiteley. “It’s as basic as it gets, and it gets muddy and it gets dirty and we get to go out and play—all on a budget.”The owner of the PA–14 is an active pilot and aircraft owner (this is not his first or only aircraft) and revels in restoration; John Hirons showed off photos of his Mercedes 300 SL currently being beautifully restored in California. Hirons wanted the PA–14 to “join in on the fabric fun,” Bushman says, and wanted the aircraft to be unique and custom. He rattled off the enhancements, from new engine to panel to fit and finish (see “Modifications to the PA–14,” below), that Hirons came in weekly to inspect and approve. In all, there were 30 alterations and changes to the aircraft, all of which had to be FAA certified.

“It’s the nicest PA–14 on the planet,” Bushman says. “It’s the most beautiful airplane and everything is brand new. And it’s versatile. John loves showing it off and explaining all the different aspects we changed. The PA–14 is a very rare aircraft; Piper only made 247.”

Hirons wanted the PA–14 to be show quality, and Bushman pushed the limits. Even the paint scheme on the aircraft tail became an all-nighter. The owner wanted a race flag, but Bushman believed his early attempts were too flat. He proudly shows off how he painstakingly detailed each square of the black flag on the yellow paint to show movement, like a flag at the finish line—the winner.

At the opposite end of the spectrum is the experimental/exhibition 1958 Cessna 175 Bushman reimagined for his friend Jeff Whiteley. Bushman listened to what Whiteley wanted—a fun, backcountry workhorse that could take friends and family on adventures with him. Bushman suggested the Cessna 175 they discovered in the back of a hangar. “It hadn’t been flown for 20 years, the engine was questionable, but it could be had for under $20,000. To me, the 175 became the expression of the unlimited things we could do without the restrictions of a certified airplane,” Bushman says.

He likens the restoration of the 175 to the hot rods of the 1950s. “They weren’t the top cars on the line, they were the Sunday drivers—available and affordable and if you wanted to drill a hole in the sidewall, you weren’t afraid of trying.”

And Whiteley and Bushman weren’t afraid to try modifications with this 175. “I had just gotten finished restoring the PA–14,” Bushman says. “I wanted the 175 to be an expression of 100-percent unlimited performance, so I said let’s pull from the experimental world, where the most advancements are taking place. We had an FAA designated inspector come and pull the standard category certificate and issue an experimental/exhibition certificate.”

Now Whiteley and Bushman could push the limits. Parts added to the aircraft could be truly experimental, custom-made, and not constrained by the traditional FAA approval process. The downside is the FAA can place operating limitations on experimental/exhibition aircraft, restricting how and where they’re flown. For Whiteley, flying from his backyard strip, that was fine.

“I enjoyed supporting this mad scientist. He’d run upstairs, and I’d hear the whine of a saw and he’d come back down with some part and say, ‘Let’s try this,’” laughs Whiteley. “It’s as basic as it gets, and it gets muddy and it gets dirty and we get to go out and play—all on a budget.”

The 175 now has a tailwheel configuration; more than 75 pounds of stuff was deleted from its interior; it has leading edge slats; and it can take off in less than 200 feet (see “Modifications to the Cessna 175,” page 52). “You get a lot of bang for the buck. It’s a high-performing airplane that has a really nice race-car feel. It’s so much fun. We come back from a flight and laugh like little girls remembering what this aircraft can do and how much fun we have,” Bushman says.

He has taken criticism from some in the aviation community about his work on the 175: “One half says, ‘How could you guys think you could improve on Cessna and all their engineers?’ and the other half says, ‘How can I turn my aircraft into a fun airplane?’”

With both aircraft Bushman has tried to push the limits. The PA–14 is certified (“tried and true”) and the Cessna 175 is experimental/exhibition (“never been done before”). He’s proud of both. “Both are huge projects—taking a blank paper and pushing the limits. And both were a lot of fun to build.”

If you’ve heard of either of these projects before, it’s probably because of Bushman’s social media presence. He posts daily updates on Facebook. But even though people say he should make YouTube videos and post on other sites, he’s sticking with just the one. “It’s quick and with the volume of work I have, that’s about as much as I can handle,” he says. “It is great to hear from people and bounce ideas off of others—and sometimes I’ll take someone else’s word for it—but I like to do it myself.”

To that end, he says, the future isn’t in re-creating projects he’s already done before. “I always want to try something new; I’m excited for the next one. I’m happy to help someone else try what I’ve done themselves. I’m always looking for the next great thing.” 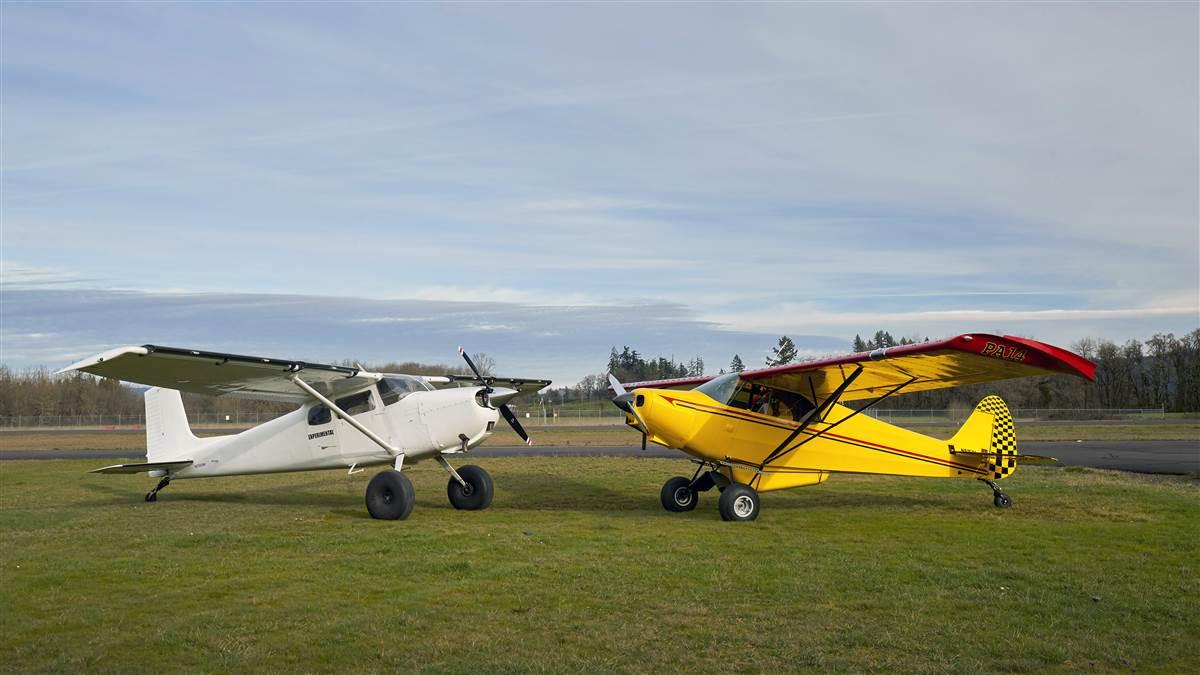 Modifications to the Cessna 175

Editor’s note: At presstime new Polaris RZR seats were installed in the 175; Bushman says the aircraft is “Basically a four-wheeler of the sky.”

Modifications to the Piper PA–14 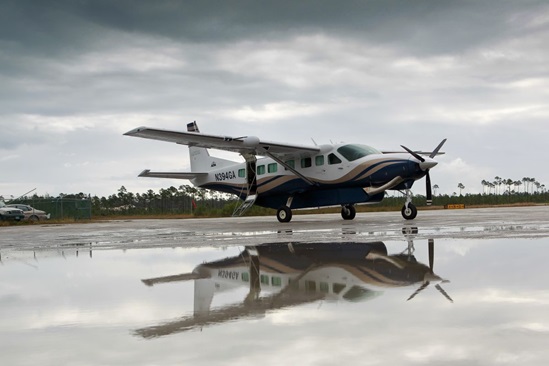 Why Aircraft Hold Times Are Going Down