Get the app Get the app
Already a member? Please login below for an enhanced experience. Not a member? Join today
Advocacy Airports, Airspace and Weather Navigation and Charting NAVAID Decommissioning

The FAA’s 2018 Navigation Programs Strategy calls for NDBs (including Locator Outer Markers) to be gradually phased out of the National Airspace System (NAS), and to reduce the current network of VORs to a Minimum Operational Network  by eliminating approximately 30% of the facilities. In order to achieve the transition to Performance Based Navigation (PBN)  and achieve the goal outlined in the PBN NAS Navigation Strategy to change the purpose of VORs from providing a route structure to being a resilient method of navigation during Global Navigation Satellite System (GNSS) failure, the FAA is decommissioning some of the existing ground infrastructure. As the decommissioning proceeds, it is important for pilots to understand how the process works.

The FAA determined it would be financially unsustainable to retain both the ground-based infrastructure that has made up the en route navigation system for the past seven decades and implement a system based on PBN. PBN offers increased efficiency, fuel savings, and off-route or point-to-point operations. It was clear that a drawdown of conventional NAVAIDs would be required; however, it would also be necessary to retain a core network to allow navigation should the satellite constellation become unavailable.

As noted in the FAA’s strategy documents, the agency is in the process of decommissioning over 300 VORs and the over 150 NDBs it maintains in the NAS. The VOR MON will result in the majority of VORs remaining available for pilots in the Contiguous United States as part of a resiliency structure. NDBs are slowly being phased out through attrition as the FAA has no sustainment or acquisition program for these NAVAIDs. The percent of all NDBs in Alaska that are out of service has increased steadily to approximately 25% in 2018. By 2030, all NDB approaches and most Colored Airways (found in Alaska) are expected to be removed from the NAS. As the FAA increases the number of NAVAIDs decommissioned, it is important for pilots to be aware of the notification process the FAA uses to alert pilots of a system being taken out of service. The following information is sourced from various FAA guidance documents.

In support of the VOR MON and the FAA’s strategy of transitioning to a NextGen NAS, the FAA is decommissioning hundreds of NAVAIDs. FAA strategy, operational requirements, air traffic demand, and budgetary limitations are normally the basis for retention or decommissioning of FAA NAVAIDs. Since economics are a necessary consideration, a NAVAID becomes a candidate for decommissioning when the activity level, or factors other than activity level on which it may have been justified change significantly. FAA−funded NAVAIDs are allocated so that they benefit the greatest number of users consistent with safety and operational efficiency.

Once the FAA identifies a NAVAID as a candidate for decommissioning, the geographically responsible Service Area offices publish a nonrulemaking circular notice of the proposed discontinuance action to solicit comments from interested persons and organizations. Circularized nonrulemaking notices can be found on the FAA’s OEAAA website and pilots may submit their comments using that portal. As the FAA’s strategy involves divesting from NAVAIDs, any argument for why a NAVAID should be retained for local purposes needs to be substantive. A brief description of the discontinuance effect on airspace and instrument procedures will be included in the circularization.

Once a determination to discontinue a NAVAID has been made, the responsible Service Area office will initiate established Part 71 and Part 97 rulemaking processing procedures. The FAA will publish Notices of Proposed Rulemaking (NPRM) in the Federal Register to solicit public comments on all proposed Part 71 airspace and Air Traffic Service (ATS) route amendments prior to implementing amendment actions within the NAS. After consideration of all public comments received, the FAA will determine whether to issue final rules announcing Part 71 airspace and ATS route, and Part 97 standard instrument procedure amendment determinations in the Federal Register.

If a NAVAID fails or is removed from service prior to all airspace and procedural dependencies being removed, a NOTAM will be published to inform pilots of the NAVAID being Unserviceable (U/S) or Out of Service (OTS). Pilots must check NOTAMs to ensure any NAVAID required for the flight is in service. There can be considerable time between the NAVAID being U/S and its ultimate removal from the charts. During the transition period, a NOTAM is the primary method of alerting pilots to its unavailability. The FAA will also cease broadcasting the NAVAID’s Morse code identifier. Pilots can substitute the use of GNSS in certain cases. Additional information on FAA NOTAMs, and how they communicate NAVAID status information, is published in the FAA’s Back to Basics presentation.

A NAVAID is removed from aeronautical charts when it is decommissioned, which occurs after all airspace and procedural dependencies on that NAVAID have been removed. Most of these dependencies are airspace and routes published under Part 71, and procedures published under Part 97. Due to the duration of processing Part 71 and Part 97 amendments, it may be several years between a NAVAID’s approval for decommissioning and its removal from charts. The NOTAM indicating the NAVAID’s unavailability will remain published until the NAVAID is decommissioned and removed from the following publications and charts:

Pilots can utilize the FAA’s Instrument Flight Procedures Information Gateway website to view an individual airport’s proposed procedure amendments and cancellations, and to submit comments. AOPA also has a fact sheet describing how to use the Gateway. 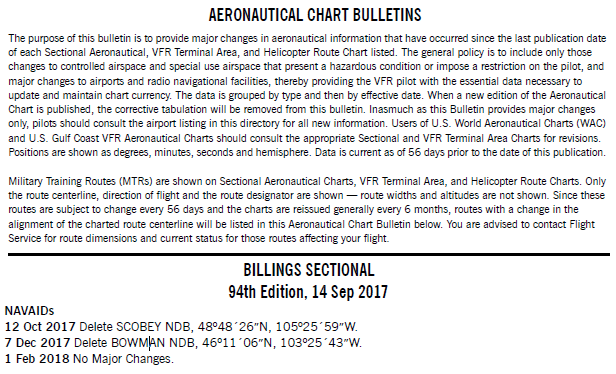 AOPA actively participates in the Aeronautical Charting Forum, NOTAM Task Force, the Air Traffic Organization Top 5 initiative, and other government/industry committees to identify and resolve issues related to NAVAID decommissioning. We are involved in NOTAM and charting policy to ensure that NAVAIDs that are unavailable are clearly indicated to pilots. The NOTAM Search website is one product of this collaboration. This website allows more efficient searching, filtering, and sorting of NOTAMs.

AOPA continues to be heavily engaged in the VOR MON effort and in the transition to a PBN NAS, which the association strongly supports. The majority of general aviation aircraft flying IFR are equipped with PBN capabilities and are now flying point-to-point, untethered to ground-based NAVAIDs. To support these aircraft, older expensive NAVAID systems need to be discontinued.

Pilots can contact AOPA via [email protected] with any questions or concerns about individual NAVAIDs or the decommissioning process.