Get the app Get the app
AOPA Members DO more LEARN more SAVE more - Get MORE out of being a pilot - CLICK HERE
Advocacy Airports, Airspace and Weather commercial space launch

The number of commercial space launches increased 400% from 2015 to 2018. The number of companies involved and the number of approved spaceports continues to grow. Many of these commercial space activities occur on the coasts, but activity is increasing in the interior of the country and even near large cities. Similar to the integration efforts underway with drones and urban air mobility, the growing number of space launches need to be integrated into the National Airspace System (NAS) so as to mitigate the adverse impacts on general aviation.

To avoid large amounts of airspace being restricted during launch or reentry activity, the FAA has worked with industry to avoid activating large areas of charted Special Use Airspace (SUA), like Restricted Areas. Instead, in collaboration with users, the FAA has defined new hazard areas that will limit the boundaries of the area needing to be protected from nonparticipating aircraft. The two areas that impact pilots are the Aircraft Hazard Area (AHA) and the Transitional Hazard Area (THA). This fact sheet will define these areas, the impact each has on operations, and how pilots can fly safely and efficiently in the proximity of commercial space launches.

In order to protect nonparticipating aircraft from the potential of a launch or reentry mishap and the resulting falling debris, the FAA has defined the airspace that must be protected. Most pilots are familiar with the Temporary Flight Restrictions (TFR) published for space activity that are issued under 14 CFR 91.143. These TFRs alert pilots of the times and area that must be restricted in the interest of safety.

The size of the TFR can vary depending on several factors that are unique to each launch or reentry, but the size is mathematically calculated based on the FAA’s target level of safety for that operation. Air Traffic Control (ATC) uses a different method for calculating the target level of safety than the Commercial Space Transportation Office. In order to keep the protected area manageable, ATC worked with the Commercial Space Transportation Office to determine an acceptable level of risk that would ensure nonparticipating aircraft were protected while also providing for efficient operations. The product of this effort was the Aircraft Hazard Area (AHA) and the Transitional Hazard Area (THA). The acceptable level of risk strategy was initially implemented in 2018 and continues to be refined.

The Aircraft Hazard Area (AHA) is the area that must be protected by a TFR, stationary Altitude Reservation (ALTRV), or Special Use Airspace (SUA). The AHA is where the risk is the highest, and operations of nonparticipating aircraft are prevented.

An ALTRV NOTAM can restrict IFR aircraft operations within the defined area; however, the information contained within that NOTAM is also useful for VFR pilots’ situational awareness as it advises of potential hazards. ALTRVs may be issued to protect the AHA airspace at any altitude but primarily are utilized for airspace above Flight Level 180 (i.e., Class A airspace) and airspace located outside U.S. domestic airspace (i.e., 12 NMs offshore). An ALTRV does not prevent VFR operations but pilots should be aware of the activity taking place within that area before transiting the airspace and should consider alternative routing.

The TFR NOTAM, which does apply to all aircraft, will provide the activation times and lateral boundaries of the airspace needing protection from VFR and IFR aircraft. Pilots may also see Restricted Areas, Warning Areas, and other SUA activated via NOTAM in support of commercial space launches.

Aircraft Hazard Area (AHA) – Used by ATC to segregate air traffic from a launch vehicle, reentry vehicle, amateur rocket, jettisoned stages, hardware, or falling debris generated by failures associated with any of these activities. An AHA is designated via NOTAM as either a TFR or stationary ALTRV. Unless otherwise specified, the vertical limits of an AHA are from the surface to unlimited.

Pilots are reminded that TFRs that extend beyond 12 NMs, the U.S. coastal limit, still apply to FAA certificated pilots and U.S. registered aircraft so must be respected. 14 CFR 91.703 and Advisory Circular 91-63D explain this requirement. Additionally, the TFR NOTAM should include an explicit note of this applicability.

The Transitional Hazard Area (THA) is a defined area where the risk is low enough that nonparticipating VFR aircraft can fly through unrestricted. However, IFR aircraft require ATC services so are subject to additional operational restrictions. The additional operational restrictions for IFR aircraft transiting a THA include the use of mandatory routes and limitations on deviations from that route. Basically, ATC needs IFR aircraft to cross a THA as expeditiously as possible. Pilots are alerted to these requirements by a NOTAM. 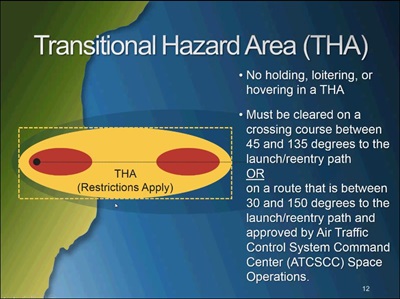 Transitional Hazard Area (THA) – Used by ATC. Airspace normally associated with an Aircraft Hazard Area within which the flight of aircraft is subject to restrictions.

VFR aircraft will not be denied entry into, out off, or through a THA; however, ATC services may not be fully available in this area. The FAA may not provide ATC services to aircraft at airports that lie within a THA. For example, a towered airport located in a THA may become nontowered during the commercial space launch, but VFR pilots will not be prevented from continuing to operate at the airport and should not be adversely affected. In fact, VFR flight following will be available in a THA. Another example would be an IFR aircraft inbound to an airport located within a THA may be given holding instructions and kept clear of the THA until the launch activity ends, or the pilots cancels their IFR clearance and proceeds VFR to the airport.

Temporary Flight Restrictions (TFR) are normally not issued for airspace beyond 12 NMs from the U.S. coastline; however, a person operating a civil aircraft of U.S. registry or who has an airman certificate issued by the FAA would have to comply with the provisions of a TFR beyond the 12 NM coastal limit due to 14 CFR 91.143 and 14 CFR 91.703. These types of TFRs that extend beyond the 12 NM U.S. coastal limit are issued regularly for Cape Canaveral and for commercial space launches. Per Advisory Circular 91-63D, TFR NOTAMs will note their applicability to U.S. aircraft and pilots if restrictions are located in an area that extends beyond the coastal limit or a U.S border. Pilots should respect any TFR even if it is located outside U.S. domestic airspace.

Best Practices for Flying in the Proximity of Commercial Space Activity

As the FAA works with AOPA and other industry groups to limit the impact of the increasing number of commercial space launches, pilots should be aware of the best practices to remain safe, avoid an airspace violation or being the cause of a scrubbed launch, and to fly efficiently:

If a pilot violates a TFR, they should file a NASA ASRS report within 10 days.

Commercial space launches are expected to increase in frequency and expand to more unique locations. It is important we find solutions that avoid sanitizing large swaths of airspace for hours at a time and that have an economic impact on other NAS users. It is important general aviation’s voice is at the table and that AOPA participates in finding the answers to these integration challenges.

AOPA has been actively involved in commercial space discussions, including participating in the Spaceport Categorization Aviation Rulemaking Committee (ARC), Airspace Access Priorities ARC, and providing comments to FAA rulemaking efforts. We have also been involved in the acceptable level of risk implementation discussions. We will continue to be involved particularly to ensure consistency of the implementation of these new airspace procedures and to advocate for improvements that will promote safer and more efficient operations for general aviation.