Get the app Get the app
Already a member? Please login below for an enhanced experience. Not a member? Join today
News & Media Chart Talk

An RNAV approach may be the way to go

Roanoke, Virginia, is one of those towns that the locals love, and the visitors cherish when they leave. It’s on the edge of the Blue Ridge Mountains, not far from Appomattox, Lynchburg, and Blacksburg. It also has an airport that sits atop one of the ridges, more shoe-horned in than built upon. 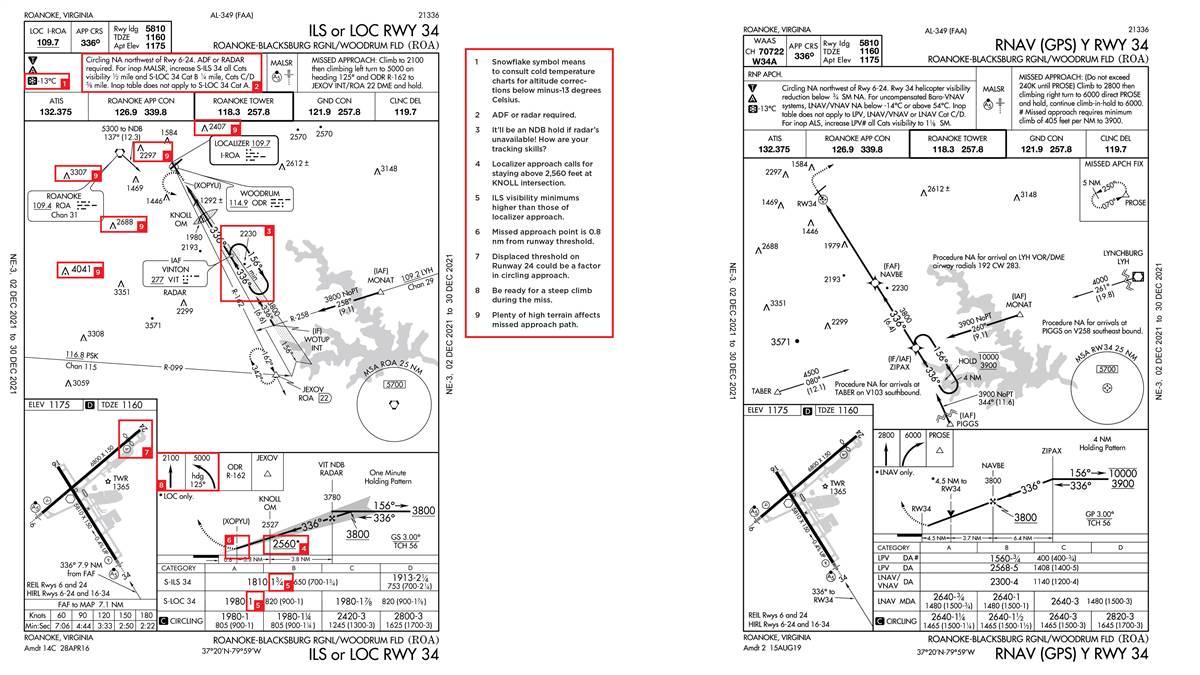 "Instead of the ILS to Runway 34, the RNAV (GPS) Y approach to Runway 34 (opposite page) offers a better strategy. It has lower, LPV (localizer performance with vertical guidance) minimums and the VDP (visual descent point) offer a more stress-free experience. And no NDB to deal with!"
Click on image to enlarge

Roanoke-Blacksburg Regional Airport/Woodrum Field (ROA) can be a challenging airport for approaches, especially at night or during any kind of weather. Because of its location and the surrounding terrain, the winds can be unpredictable and downright uncomfortable. It’s also subject to some intense ground fog in the spring and fall, especially in the mornings.

There are two runways: 16/34 is 5,810 feet and 6/24 is 6,800 feet. Both are 150 feet wide. There is only one ILS, which is to Runway 34. What is interesting is that the ILS has fairly high minimums: 700 feet with a visibility of a mile and three quarters for categories A through C. Category D aircraft need a visibility of two-and-a-quarter miles—not much less than VFR minimums. What is interesting is that the localizer-only approach has lower visibility requirements, which is unusual. I’m not sure why the ILS minimums are so high, but I speculate that there is something on or near the airport that has a measurable effect on the glideslope. It’s also possible that the 2,297-foot obstacle just northwest of the runway makes a standard 200-foot ILS missed approach unusable. Again, it’s a guess, but the sharp left turn on the missed indicates that the FAA wants you up and clear ASAP on the missed approach.

Getting ready for an approach is one thing, but if you fly to Roanoke, you really need to get ready for the airport as a whole.Another option for getting into Roanoke using Runway 34 is to choose one of the RNAV approaches. The RNAV approaches will both get you down to 400 feet and the visibility requirements are less stringent. The RNAV Z requires FAA authorization (think: airlines), but the RNAV Y is available to everyone. If the winds are calm or favoring Runway 6, an LDA with a glideslope to that runway will again net lower minimums than the ILS, with a slightly lower ceiling and visibility. But you’ll need to finesse a minor course correction after you have the runway in sight. That said, you have 1,000 extra feet of pavement in front of you after you land, so while precision is nice, it isn’t as critical as it might be on 16/34. That said, there is an engineered material arresting system for departing/landing 34 because of a nearby road.

Some airports are pretty easy to prep for, because the approaches are all either fairly generic or simple to brief and prep for with few surprises. Roanoke is different, because you really do need to study all the options to decide which one might be the best one for your situation, especially if you anticipate flying an actual instrument approach. This isn’t an airport where you just want to default to the runway that will give you the shortest taxi route to the ramp after you land. Pay attention to any notams about lights being inoperative or approach procedures being amended. Note that this is also an airport where you want to have adequate fuel reserves, as the nearest viable alternate may be 40 or more miles away, likely east to get away from the mountains.

Getting ready for an approach is one thing, but if you fly to Roanoke, you really need to get ready for the airport as a whole. Terrain, weather, approaches, and potentially distant options demand your full respect.