Get the app Get the app
Already a member? Please login below for an enhanced experience. Not a member? Join today
Advocacy Airports and Airspace Navigation and Charting VOR Minimum Operational Network

As the National Airspace System (NAS) transitions from a legacy ground-based navigation system to a NextGen space-based system, the FAA has collaborated with aviation stakeholders to ensure that resiliency is built into the system. The VOR Minimum Operational Network (MON) is designed to retain nominal VOR infrastructure to allow IFR aircraft to navigate in the event of a Global Positioning System (GPS) outage. The VORs being retained are strategically chosen to ensure adequate reception and provide the necessary framework for aircraft to find and land at a MON airport. Aircraft not equipped with GPS will still be permitted to fly in the NAS using VORs, but may have to use more circuitous routing and have limited approach capability at some airports.

The FAA determined it would be financially unsustainable to retain both the ground-based infrastructure that has made up the en route navigation system for the past seven decades and implement a system based on Performance Based Navigation (PBN). PBN offers increased efficiency, fuel savings, and off-route or point-to-point operations. It was clear that a drawdown of the VOR system would be required; however, it would be necessary to retain a core network to allow navigation should the satellite constellation become unavailable.

On Dec. 15, 2011, the FAA published a Federal Register Notice announcing the initial plans for the VOR MON with a final Notice of Proposed Policy published Aug. 21, 2012. A Radio Technical Commission for Aeronautics (RTCA) working group composed of the FAA, aviation associations including AOPA, and operators was formed in 2013 to review the FAA’s plan and determine whether changes were necessary. The recommendations of this group included the need for thorough vetting of any VOR prior to its decommissioning to limit the impact to users, that the drawdown would be over a long enough period of time to avoid adversely affecting users and allow them time to equip for PBN operations, and that there would be considerable outreach by the FAA. The working group validated the FAA’s plan with added scrutiny placed on ensuring general aviation would not be adversely affected.

To provide the resiliency required should GPS be unavailable, the VOR MON plan retains all VORs in Alaska, the western U.S. mountainous area, the U.S. islands and territories, and many VORs in the eastern and central United States. According to the FAA, in the eastern and central area, VOR-equipped aircraft will be able to navigate at or above 5000 feet Above Ground Level (AGL) to an airport within 100 NM and land at that airport using non-GPS-based landing aids (i.e., an Instrument Landing System, localizer, or VOR-based approach). Radar vectors, Distance Measuring Equipment (DME), or Automatic Direction Finding (ADF) equipage will not be required for transit or a safe landing.

In October 2015, the FAA identified the MON Airports and MON instrument procedures. The airports were selected for their geographical locations and the available instrument approaches. Together, the airports have 340 VOR and ILS approach procedures for runways as short as 4,000 feet and as long as almost 15,000 feet. 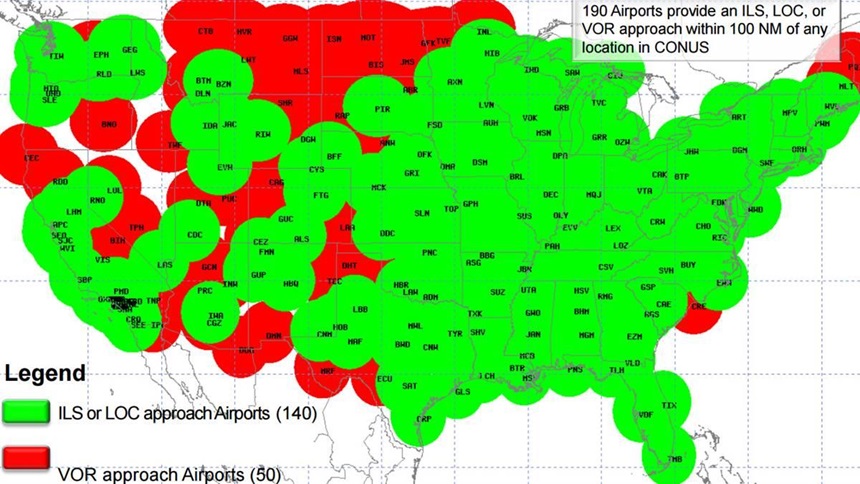 The current plan is to remove 74 VORs between 2015 and 2020 and to remove an additional 234 by 2025 for a total decommissioning of 308 facilities (about 30 percent). Included in the list of VORs to be decommissioned are 12 VORs, 155 VOR/DMEs, and 141 VORTACs. The majority are located in the eastern and central regions of the United States. In the case of VOR/DMEs and VORTACs, the DME and TACAN portions of the units will be left in place to facilitate Area Navigation (RNAV) requirements.

In November 2015, there were 957 federal VORs in the continental United States. An additional 100 nonfederal VORs are in operation around the country, but are not part of the effort to create a minimum operational network. The first 35 VORs to be decommissioned were announced in an FAA report in late 2015. In July 2016, the FAA announced in a final policy statement; the complete list of facilities scheduled to be decommissioned.

The FAA does not currently plan to change the ability to fly IFR with only a WAAS receiver (for aircraft flying under Part 91)—a VOR will not be explicitly required. The agency also does not anticipate changing fuel requirements for IFR flight.

AOPA has been actively engaged in the process since 2000, when the FAA first began considering taking VORs out of service. As a member of several task force groups considering the plan to take VORs out of service, AOPA consistently argued to keep a larger network of active VORs in place and to spread the decommissioning process over a longer period of time. AOPA continues to be heavily engaged in the VOR MON effort and in the transition to a PBN NAS which the association is highly supportive of.

AOPA is actively participating in many efforts to ensure the transition of the NAS is beneficial to GA, including:

National Procedure Assessment Initiative – This effort is a collaboration of the FAA and the industry to ensure redundant and dated conventional instrument flight procedures are removed to free up resources for the greater proliferation of PBN procedures. AOPA is active in this group to ensure procedure cancellations are based on fair criteria that take into account the mixed equipage that exists in the GA fleet. Note that this effort is separate from the VOR MON; however, removal of VORs will certainly affect published instrument procedures.

PBN NAS Navigation Strategy – This is an update to the Roadmap for Performance-Based Navigation that was published in 2006. AOPA has participated in the drafting of this document to ensure GA is represented and the challenges faced by these operators are documented.

Many other efforts are underway that are affected by the drawdown of VORs. For example, FAA Flight Service has identified specific Remote Communication Outlets (RCO) that could be removed as part of the MON effort. Their removal could have an impact on radio coverage for flight service stations. AOPA has worked with the FAA to ensure the removal of these RCOs will not have a negative impact on radio coverage and that the removal of VORs is thoroughly vetted.  Another initiative relates to the airway route structure and where Victor Airways can be removed and where they need to be retained. The association has also conducted surveys and outreach related to GPS outages to better advocate for a resilient NAS that will meet user’s needs.

Efforts are underway to ensure the availability of an Alternate Position, Navigation, and Timing (APNT) solution that would provide navigation capabilities similar to what GPS provides. A future APNT solution could allow a further reduction or removal of the VOR MON, but it must be a solution that is usable by GA.

Aside from the VOR MON, a system of DME facilities will be maintained and expanded across the United States to allow operators to fly RNAV routes despite a GPS outage. There are few avionics solutions, and even fewer that are affordable, for most GA aircraft that would allow them to navigate utilizing DME/DME or DME/DME with an Inertial Reference Unit (IRU). A long-term solution that is acceptable to both GA and airlines will be necessary. AOPA is committed to being part of the process and advocating for a solution that will work for GA.