Get the app Get the app
Already a member? Please login below for an enhanced experience. Not a member? Join today
Advocacy Advocacy Briefs Air Traffic Services Process Brief - Tall Towers: The FAA's Obstruction Evaluation Process

It is important for general aviation pilots to understand the obstacle evaluation (OE) process and how the FAA evaluates such objects. Armed with this information, airspace users can determine the impact of obstructions on their aeronautical activities. Moreover, this impact may then be communicated in an effective manner to the FAA and local governments, allowing pilots to participate in the aeronautical study process. Obstacles impacting instrument approaches close to the runway, commonly known as 20:1 obstacles, are detailed in another AOPA fact sheet. 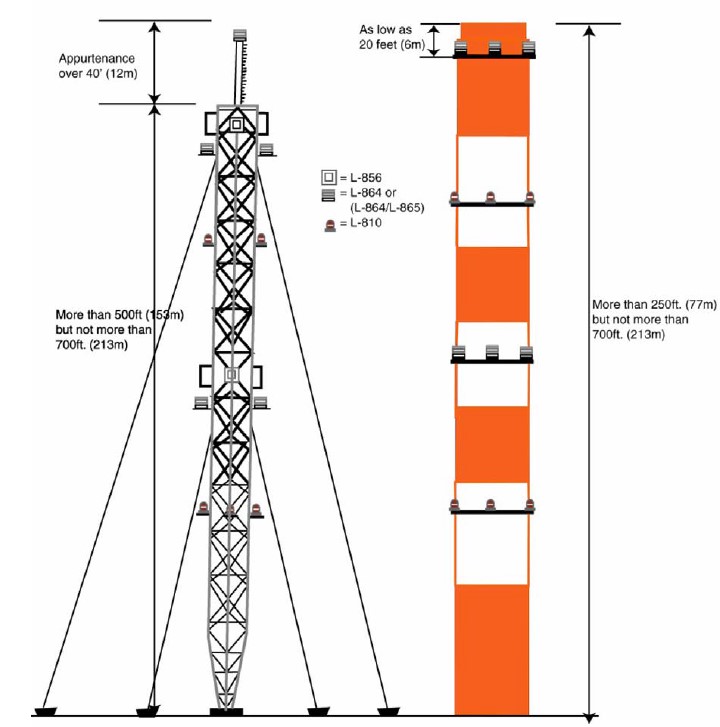 The obstruction evaluation process begins at a regional level within the FAA, and involves all lines of business including Airports, Airway Facilities, Flight Standards, Flight Procedures, and Air Traffic. The governing regulation is 14 CFR Part 77, Safe, Efficient Use, and Preservation of the Navigable Airspace.

The FAA's philosophy in evaluating objects that may impact navigable airspace is that each is presumed to be a hazard until proven otherwise. This posture clearly favors the aeronautical community and is consistent with the FAA's overall mission of promoting aviation safety.

If a tower or other object is found to have a significant adverse impact, a "hazard" determination will be issued. However, in many of these cases, the FAA negotiates with the proponent until the conditions are met for a "no-hazard" determination. These efforts are a key benefit of the FAA's participation at this level.

AOPA recognizes that balancing the needs of all airspace users is a formidable task and the complexity and diversity inherent to all aeronautical activities ensures that the FAA isn't always in the best position to evaluate every factor that must be assessed in an airspace study. This is why many studies are circularized to the public for comment. Pilots must be willing to take responsibility for providing comments as appropriate to the FAA region in which the study in conducted. Although AOPA can and often does provide comments on behalf of its members, the prestige of a national organization cannot replace the benefit of our members' intimate knowledge of their operational environment.

This document is intended to provide a high-level overview of the OE process used by the FAA in evaluating the impact of objects affecting navigable airspace. In addition, it is intended to answer many of the questions commonly asked by AOPA members. Finally, this brief will provide the aeronautical community with some strategic insight useful in opposing construction activities, should they feel it's necessary to do so.

We begin with an overview of the intent and limitations of the FAA's OE process. Aeronautical studies are conducted to determine the impact of an object on the safe and efficient use of airspace. By congressional mandate, the FAA cannot prohibit any construction activities. Instead, the FAA evaluates the proposed construction, and as necessary, works with the proponent to mitigate any impact that may result.

Step 1: When is the proponent required to inform the FAA of their intentions?

Title 14 CFR Part 77.9(a)-(d) outlines the type of construction or alteration requiring notice to the FAA. Except as provided in Part 77.9(e), each sponsor who proposes any of the following shall notify the FAA in the manner prescribed in Part 77.7(a)-(e).

In many cases, the proponent will submit their information for study to the FAA via the Obstruction Evaluation/Airport Airspace Analysis (OE/AAA) website, despite the fact their activities do not meet notice criteria. This often occurs for one of two reasons. The first is simply that the proponent did not know or incorrectly applied the notice criteria of Part 77. The second is that the issuance of a no-hazard determination from the FAA will all but insure no federal entanglements will halt construction efforts and that many finance and insurance companies require a no-hazard determination.

When the FAA has been notified of the proponent's intentions and a case has been opened, then a specialist in the FAA's Obstacle Evaluation Group will undertake the following:

If a proposed structure exceeds any Part 77, Subpart C, obstruction standard, an aeronautical study shall be conducted to identify the effects of the proposal on the use of navigable airspace. In this case, the different offices within the FAA determine the possible impact as it relates to their area of responsibility.

Not all proposals or studies are circulated to the aeronautical community for comment. In many cases, the obstruction in question is short enough or distant enough from any airport or navigational aid that no useful purpose would be served by opening the issue to the public.

So when does the FAA circularize a study for comment? Guidance for this is provided in FAA Order 7400.2, Procedures for Handling Airspace Matters. Proposals requiring public notice include:

Conversely, circularization to the public is normally not required for the following:

With a better understanding of the requirements for circularization, a discussion may now begin on the parties to whom the circulars are distributed. As a rule, the following entities will receive notification of an OE case:

The methods used in circularizing a proposal or soliciting comments are relatively simple and straightforward. Public notice is generally provided through the issuance of an automated OE circularization letter and related documents. FAA specialists may also contact the necessary parties by telephone. Finally, informal airspace meetings may be convened to discuss a specific proposal.

This is the point at which the FAA determines if an object is a hazard to the aeronautical community. By now, the FAA has already determined if an object exceeds the obstruction standards outlined in Part 77. However, keep in mind that the obstruction criteria set forth in Part 77 are just that, a standard to determine if it is necessary to further study the impact of a construction proposal. This criterion is not regulatory in nature, and exceeding the prescribed standards is by no means a disqualifying factor for a proponent. Simply put, an obstruction is not necessarily a hazard.

In order for an object to be considered for adverse effect, one or more of the following conditions must be met:

At this point, the FAA has still not made a hazard/no-hazard determination. For a hazard determination to be issued, a substantial adverse effect must exist. This requires a combination of two factors. First, an object must create an adverse effect (see above). Next, a significant volume of aeronautical operations must be affected. FAA Order 7400.2 provide guidance on what constitutes "significant volume."

When one of the following occurs, significant volume is considered to exist. 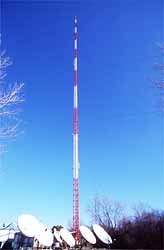 HOW CAN I GET ALERTS FOR NEW OBSTRUCTIONS NEAR MY AIRPORT?

Pilots can subscribe to the FAA’s OE/AAA system to get email alerts for off-airport aeronautical studies. The FAA’s guide to setting subscription preferences details the variables that can be set when requesting these alerts including structure height and distance from airport. Pilots can also subscribe to changes in local instrument approaches by following the guidance in AOPA’s fact sheet on establishing an instrument approach.

HOW DO I REPORT A TOWER LIGHT OUTAGE?

Light outages can be reported to the FCC via the Consumer Complaint Center. If you believe the outage threatens public safety, you can report the outage to the FCC Operations Center by calling 202-418-1122. When reporting, please have the following information available: the location of the structure which can be found by doing a circle search; the Antenna Structure Registration (ASR) number for FCC towers or Aeronautical Study Number (ASN) for other structures or cranes; name of responsible company; and any other pertinent information.

WHERE CAN I FIND THE CURRENT FAA LIGHT AND MARKING GUIDANCE?

The FAA publishes their obstruction marking and lighting guidance in AC 70/746-0-1. This guidance is continuously updated based on changing requirements and new research. For example, lighting requirements were changed in 2016 following a study investigating new lighting schemes that would reduce avian fatalities.

CONSTRUCTION HAS STARTED ON AN OBSTRUCTION NEAR MY AIRPORT, WHAT CAN I DO TO HELP PROTECT THE AIRPORT?

This is a common obstruction question received by AOPA’s Pilot Information Center. Unfortunately, once permits have been issued or construction has begun, there’s little to nothing that can be done to prevent construction from being completed. The FAA has no authority to prevent construction, which makes obstruction approval or denial largely a local issue. The best way to protect your airport is to stay informed, in advance, of the goings-on of your local zoning or permitting authority. Attending local meetings or monitoring meeting minutes online are ways to stay up to date.

It may be necessary to monitor more than one authority. For example, your home airport may be owned by the county, but the authority of a different city or county could be a short distance away from the airport. Simply monitoring the authority for the county that owns the airport may not notify you of a potential obstruction proposed in the neighboring authority. Additionally, any airport protection zoning codes implemented by the authority that owns the airport may not apply to a neighboring authority. Staying informed in advance and communicating your concerns to the local authority as early as possible in the planning process is an important step in protecting your airport. Guidance on how to approach communicating your concerns is provided below.

THERE IS AN OBSTACLE BEING PROPOSED NEAR MY AIRPORT THAT I FEEL IS A HAZARD, HOW CAN I COMMUNICATE THIS TO THE FAA OR LOCAL AUTHORITIES?

As a pilot or airport owner reading this brief, you are likely concerned with what you can do to participate in an aeronautical study. The options available to you in fighting a construction proposal largely depend on the type of airport from which you operate. There are two basic types to consider, private and public-use airports. Unfortunately, the FAA's Part 77 process does not take into consideration the private-use facility. If such an airport stands to be the only facility impacted, a notification may not be circulated. However, if the aeronautical study is circulated for comment, it may still be worth your time to comment. If you do choose to comment in this instance, keep these points in mind. First, the impact to a private-use airport will not be considered in the study, regardless of the severity. So any discussion based on this point will be futile, and should be avoided. Instead, take a critical look at the system-wide implications of the proposed construction. When doing so, regardless of the public versus private status of your airport, ask yourself the following questions:

How you answer these and other questions related to adverse effect will largely determine the nature of your comments to the FAA. If your comments cannot be tied to similar factors impacting the safe and efficient use of airspace, and the FAA has no cause for concern, a no hazard determination will likely be the outcome.

Pilots should also contact the local zoning and government authority to ensure they are aware of the aeronautical concerns of the proposed structure. In many cases, these authorities are not familiar with FAA regulations or the safety and operational impacts a structure may have so it is important to approach this as an education opportunity. Proactively communicating with local authorities about the impacts obstructions near airports can have is encouraged with various resources available online providing model zoning ordinances. Additional local resources can be found on AOPA’s airport advocacy page.