Get the app Get the app
Get the latest news on coronavirus impacts on general aviation, including what AOPA is doing to protect GA, event cancellations, advice for pilots to protect themselves, and more. Read More
Already a member? Please login below for an enhanced experience. Not a member? Join today
News & Videos Mentor Matters: To the letter

By Neil Singer
Letters of authorization (LOAs) have become an increasing source of frustration for operators of turbine aircraft, particularly jets. Despite repeated efforts by the FAA to streamline the process of LOA application and approval, vast inconsistencies exist in both the ease and speed of the process as experienced by different operators applying for the same approval. 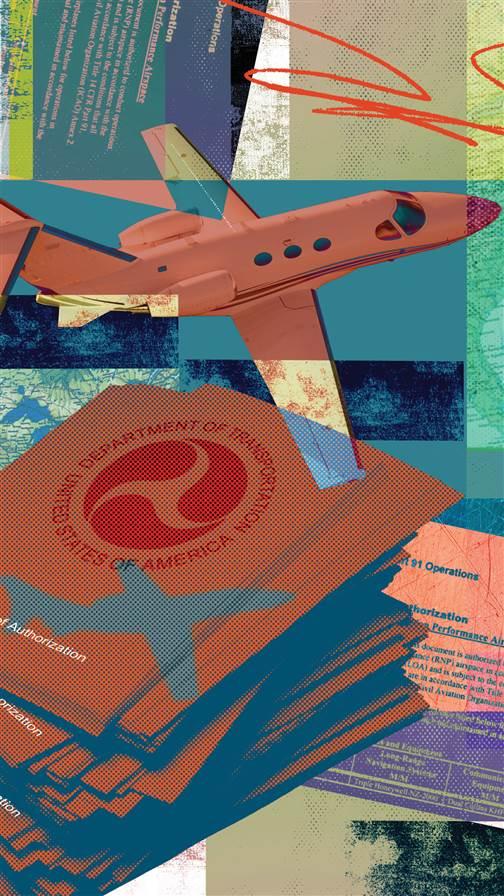 Unfortunately, despite some recent positive moves by the FAA, the general trend is toward a requirement for more, not fewer, LOAs—especially for operators who wish to operate internationally, or utilize the full capabilities of the NextGen airspace, which is rapidly becoming a reality. For these reasons, an awareness of the issues surrounding LOAs is critical for any jet operator, but especially for the new, first-time jet owner.

An LOA is permission granted by the FAA to a Part 91 operator to use one or more specified aircraft (by N number, not type) in a specified type of operation. A critical point is that the LOA is not issued to the aircraft, but to the operator. In the FAA’s words: “LOAs must be issued to the person or entity that intends to operate the aircraft under the LOA. When an aircraft is owned by more than one person, or is leased, each operator must have an LOA unless otherwise specified in the applicable regulation or in this order.”

Until a few years ago it was common for an entity (e.g., a holding limited liability company) that owned an aircraft to be the holder of necessary LOAs, while multiple owners or lessees would enjoy the benefits of that single set of LOAs. However, this is not in compliance with the federal aviation regulations, and the FAA has been vigorously enforcing the requirement for every operator to possess any needed LOAs. An operator could have multiple aircraft listed on its LOA; for example, an owner/pilot of a light jet might have an agreement with another owner of a similar type to use that aircraft when their own aircraft is in maintenance. In this case, the operator would want both N numbers listed on the LOAs. Similarly, a specific airplane could appear on multiple LOAs, if it is operated by many people.

The labyrinth becomes increasingly difficult to navigate as operators contemplate international trips outside the United States, especially those involving a North Atlantic crossing.The most common LOAs for a light jet operator to seek are those to allow use of a minimum equipment list (MEL), and to allow operations in reduced vertical separation minimum (RVSM) airspace—the airspace between Flight Level 290 and FL410, inclusive. While a recent change in the FARs allows for domestic operations in RVSM airspace without an LOA if an aircraft is equipped with ADS-B Out, the LOA is still necessary for operators wishing to take their airplane outside the United States. The LOA to allow use of an MEL is especially critical because without it, every item on the aircraft must be operational for it to be airworthy. Turbine-powered aircraft cannot use the latitude afforded to piston aircraft to placard items inoperative if not required for the type of operation (e.g., nav lights for daytime flight) unless they hold an LOA allowing use of an MEL for such purposes.

Beyond these two more basic LOAs, the labyrinth becomes increasingly difficult to navigate as operators contemplate international trips, especially those involving a North Atlantic crossing. What a decade ago was a more or less “rubber stamp” LOA titled minimum navigation performance specification (MNPS) has been replaced by a combination of two LOAs: RNP10 (required navigation performance level of 10 nautical miles) and North Atlantic high-level airspace (NAT HLA). The largest change accompanying this switch has been in the level of scrutiny, at times bordering on outright reluctance, that the FAA has shown some single-pilot operators in issuing a NAT HLA letter of authorization.

Services that provide the necessary international operational manuals and complete the extensive application packet for operators have been noticing this trend for several years. Christy DeYoung, president of Jet RVSM Services, has assisted more than 5,000 operators with submitting Part 91 LOA applications, and recommends starting the process many months before the intended international trip. “We’re aware of horror stories in which international LOA applications have taken over a year,” she said. “The inspectors don’t respond well to being pressured, so patience is key.”

Further, the level of education expected on the part of the pilot has increased dramatically over the past several years. DeYoung has seen a rise in “tabletop” exercise requirements from the FAA: “In our experience, single-pilot owner/operators are scrutinized more closely by the FAA and should prepare for an extended in-person tabletop discussion where multiple inspectors will quiz them on their knowledge of international operations and regulatory requirements.” There are online providers of international procedures training that can offer the necessary initial training to prepare a pilot for such exams, but the material is extensive, so allowing sufficient time for digestion and study is a must.

RNP 10 and NAT HLA letters of authorization only get an airplane to Europe; further LOAs may be required once there. Starting next year, European authorities are requiring controller-pilot data link communications (CPDLC) technology be installed and used in aircraft that will fly above FL285. Installation of controller-pilot data link communications equipment is not enough, however: The operator also must possess an LOA granting permission for its use, essentially a statement from the FAA that the agency has reviewed the operator’s procedures to ensure its pilots are properly trained and knowledgeable about the system. Again, expect the FAA to ask for demonstration of the knowledge through an in-person event.

As these increasing demands for LOAs come at a time when the FAA is making do with fewer inspectors, the prudent new owner of a light jet would be well served by starting the application process for any potentially needed LOA right away. Giving adequate time to become educated on the paperwork that is required to be submitted—and on the material the pilot needs to master before a table top exercise—will make for a dramatically less stressful, and more likely successful, process than if the LOA application is begun shortly before an intended trip abroad.AOPA

Neil Singer is a Master CFI with more than 9,500 hours in 15 years of flying.